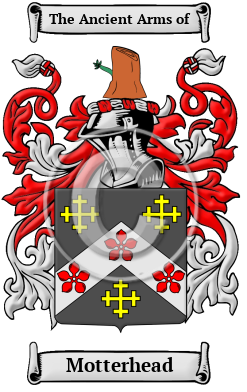 Motterhead is a name that was brought to England by the ancestors of the Motterhead family when they migrated to the region after the Norman Conquest in 1066. The Motterhead family lived in Cheshire at Mottram St. Andrew, a small village and parish that dates back to the Domesday Book where it was listed as Motre, but later listed as Motromandreus in 1351. The place name possibly meant "speaker's place" or "place where meetings are held" from the Old English motere + rum. [1] More recently, it is home to Mottram Hall, a house built around 1750. Mottram in Longdendale is a village in Greater Manchester. It is one of the eight ancient parishes of the Macclesfield Hundred of Cheshire and dates back at least 1242.

Early Origins of the Motterhead family

The surname Motterhead was first found in Cheshire where they held a family seat as Lords of the Manor of Mottram at the time of the Norman Conquest of England by Duke William of Normandy in 1066 A.D. Conjecturally they are descended from Gamal whose father held the Lordship from Earl Hugh Bigod, the Chief tenant. Mottram was classed as a Hawk's eyrie at the time of the taking of the Domesday Book survey in 1086 A.D. The village is now two villages, Mottram St. Andrew and Mottram Cross. There is now a Mottram Old Hall. The name also became Mottershead about the 16th century, branching away but retaining the same Coat of Arms.

Early History of the Motterhead family

Spelling variations in names were a common occurrence in the eras before English spelling was standardized a few hundred years ago. In the Middle Ages, even the literate regularly changed the spellings of their names as the English language incorporated elements of French, Latin, and other European languages. Many variations of the name Motterhead have been found, including Mottram, Mottrame, Motram, Motramm, Motteram, Mottvane, Mottershead, Mottishead, Mottishitt and many more.

More information is included under the topic Early Motterhead Notables in all our PDF Extended History products and printed products wherever possible.

Migration of the Motterhead family

For many English families, the social climate in England was oppressive and lacked opportunity for change. For such families, the shores of Ireland, Australia, and the New World beckoned. They left their homeland at great expense in ships that were overcrowded and full of disease. Many arrived after the long voyage sick, starving, and without a penny. But even those were greeted with greater opportunity than they could have experienced back home. Numerous English settlers who arrived in the United States and Canada at this time went on to make important contributions to the developing cultures of those countries. Many of those families went on to make significant contributions to the rapidly developing colonies in which they settled. Early North American records indicate many people bearing the name Motterhead were among those contributors: Thomas Mottram and William who arrived in Philadelphia, Pennsylvania in 1856; Adam Mottershed settled in Virginia in 1698; John Mottershitt settled in Virginia in 1663..