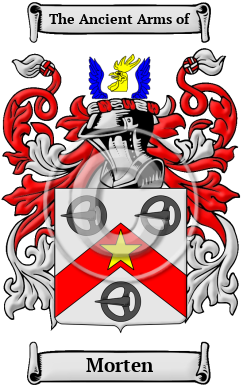 In ancient Scotland, the first people to use Morten as a surname were the Strathclyde- Britons. It was a name someone who lived in Cheshire, but by the 12th century most of the fmaily had moved to Dumfries in Scotland. Morton, or Moreton, come from the Old English word, mor, which means marsh, fen or moor, and tune, which means village or settlement.

Early Origins of the Morten family

The surname Morten was first found in Cheshire, where they held a family seat from very early times and were granted lands by Duke William of Normandy, their liege Lord, for their distinguished assistance at the Battle of Hastings in 1066 A.D.

Early History of the Morten family

This web page shows only a small excerpt of our Morten research. Another 115 words (8 lines of text) covering the years 1160, 1170, 1581, 1590, and 1647 are included under the topic Early Morten History in all our PDF Extended History products and printed products wherever possible.

The origin of rules governing the spelling of names and even words is a very recent innovation. Before that, words and names were spelled according to sound, and, therefore, often appeared under several different spelling variations in a single document. Morten has been spelled Morton, Moreton, Moorton, Myrton and others.

Notable among the family at this time was James Douglas, 4th earl of Morton (d. 1581), Scottish nobleman, who ruled as a regent for James IV; a A line of Moretons, who were Earls of Ducie, as well as John Morton of York, who was the Archbisop of Canterbury and Lord Chancellor of England during the reign of...
Another 58 words (4 lines of text) are included under the topic Early Morten Notables in all our PDF Extended History products and printed products wherever possible.

Migration of the Morten family to Ireland

Some of the Morten family moved to Ireland, but this topic is not covered in this excerpt.
Another 56 words (4 lines of text) about their life in Ireland is included in all our PDF Extended History products and printed products wherever possible.

Morten migration to the United States +

Morten Settlers in United States in the 17th Century

Morten Settlers in United States in the 18th Century

Morten Settlers in United States in the 19th Century

Historic Events for the Morten family +