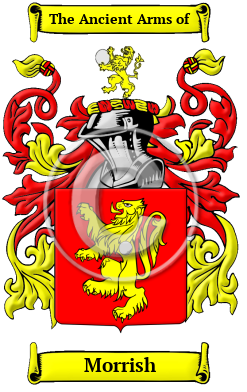 The English surname Morrish comes from the place name St. Maurice, Normandy where N. de St. Maurice was listed in the Magn. Rotul. of Normandie (1180-1195.) This personal name is in turn derived from the Latin name Mauritius, which comes from maurus, meaning " a moor."

Early Origins of the Morrish family

The surname Morrish was first found in Herefordshire. Early records there show Isabell, John and Margeries Morice in England c. 1272. The same census shows William filius Maurici in Huntingdon, Richard filius Maurycii in Cambridge and Peter filius Maurice in Lincoln county. The surname may also be a nickname for someone who was "swarthy" as shown by the Robert le Mareys reference in 1274.

Early History of the Morrish family

Spelling variations of this family name include: Morris, Morriss, Moriss, Morrice, Morice, Moris and others.

Another 49 words (4 lines of text) are included under the topic Early Morrish Notables in all our PDF Extended History products and printed products wherever possible.

Migration of the Morrish family to Ireland

Some of the Morrish family moved to Ireland, but this topic is not covered in this excerpt.
Another 78 words (6 lines of text) about their life in Ireland is included in all our PDF Extended History products and printed products wherever possible.

Morrish migration to the United States +

Morrish Settlers in United States in the 17th Century

Morrish Settlers in United States in the 19th Century

Morrish Settlers in Australia in the 19th Century

Historic Events for the Morrish family +