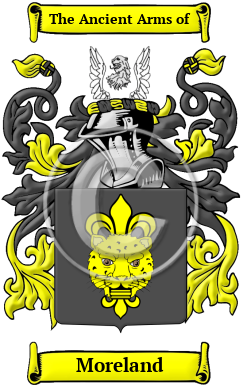 The roots of the Anglo-Saxon name Moreland come from when the family resided on a moor, which is a tract of open, uncultivated ground which is usually grown over with heather and coarse grasses and has a poor, peaty soil. The surname Moreland literally means dweller by the moor-land. The surname Moreland belongs to the class of topographic surnames, which were given to people who resided near physical features such as hills, streams, churches, or types of trees. [1]

Early Origins of the Moreland family

The surname Moreland was first found in Westmorland. The Mauley branch of the family claim Ugthorpe in the North Riding of Yorkshire as their ancient ancestral home. "This was an ancient demesne of the crown, and is styled in Domesday Book Ughetorp; the Mauleys became lords here at an early period, and from them the manor and estate descended by marriage to the Bigods, and afterwards to the Ratcliffes, by whom the whole was sold in parcels." [2]

Early History of the Moreland family

This web page shows only a small excerpt of our Moreland research. Another 164 words (12 lines of text) covering the years 1100, 1190, 1625, 1695, 1660, 1789 and are included under the topic Early Moreland History in all our PDF Extended History products and printed products wherever possible.

The English language only became standardized in the last few centuries; therefore,spelling variations are common among early Anglo-Saxon names. As the form of the English language changed, even the spelling of literate people's names evolved. Moreland has been recorded under many different variations, including Morland, Morley, Moorland, Morthland, Morlay and many more.

Notables of this surname at this time include: Sir Samuel Morland (1625-1695), notable English academic, diplomat, spy, inventor and mathematician, made 1st Baronet Morland in 1660; the...
Another 26 words (2 lines of text) are included under the topic Early Moreland Notables in all our PDF Extended History products and printed products wherever possible.

In the United States, the name Moreland is the 1,805th most popular surname with an estimated 17,409 people with that name. [6]

Migration of the Moreland family to Ireland

Some of the Moreland family moved to Ireland, but this topic is not covered in this excerpt.
Another 60 words (4 lines of text) about their life in Ireland is included in all our PDF Extended History products and printed products wherever possible.

Moreland migration to the United States +

For many English families, the political and religious disarray that shrouded England made the far away New World an attractive prospect. On cramped disease-ridden ships, thousands migrated to those British colonies that would eventually become Canada and the United States. Those hardy settlers that survived the journey often went on to make important contributions to the emerging nations in which they landed. Analysis of immigration records indicates that some of the first North American immigrants bore the name Moreland or a variant listed above:

Moreland Settlers in United States in the 17th Century

Moreland Settlers in United States in the 18th Century

Moreland Settlers in United States in the 19th Century

Moreland Settlers in Canada in the 19th Century

Moreland Settlers in Australia in the 19th Century

Moreland Settlers in New Zealand in the 19th Century

Suggested Readings for the name Moreland +