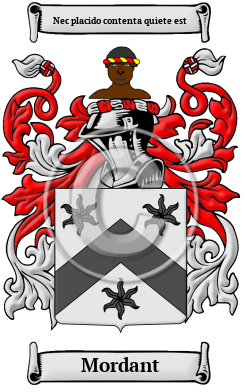 Early Origins of the Mordant family

The surname Mordant was first found in Bedfordshire (Old English: Bedanfordscir), located in Southeast-central England, formerly part of the Anglo-Saxon kingdom of Mercia. "Turvey in Bedfordshire was the principal seat of this noble Norman family, descended from Osbert le Mordaunt, who came over from Normandy with William the Conqueror, and received a grant of the lordship of Radwell in that county." [1] Another reference is more specific: "their patriarch was Sir Osbert le Mordaunt, who possessed Radwell, co. Bedfordshire, by gift of his brother, who had received it from the Conqueror, for services rendered by himself and his father." [2] The parish of Mordon (Morden) in Durham was home to another branch of the family. "This place gave name to a resident family, of whom mention occurs in the 14th century. The name was perhaps originally Moredun, or "the moorish hill," from the elevation of the place above a marsh. " [3]

Early History of the Mordant family

Outstanding amongst the family at this time was Sir John Mordaunt (died c.1505), an English politician of the Tudor period, Chancellor of the Duchy of Lancaster and Speaker of the House of Commons; Henry Mordaunt, 4th Baron Mordaunt; John Mordaunt, 1st Earl of Peterborough (died 1642), an English peer; John Mordaunt, 1st Viscount Mordaunt (1626-1675), who was an English Royalist, the second son of John Mordaunt, 1st Earl of Peterborough (died 1642.) In June 1648, he joined his brother, Henry Mordaunt (1621-1697) in leading a Royalist uprising, and fled with him to the Continent...
Another 93 words (7 lines of text) are included under the topic Early Mordant Notables in all our PDF Extended History products and printed products wherever possible.

Mordant migration to the United States +

Mordant Settlers in United States in the 17th Century

Mordant Settlers in Australia in the 19th Century