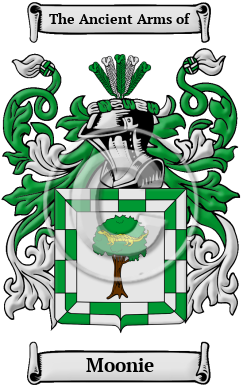 Gaelic, otherwise known as Early Modern Irish, was used in Ireland from around the year 1200 until the 18th century. It is from this language that we found the first references to the name Moonie as O Maonaigh. This is derived from the word maonach, meaning wealthy.

Early Origins of the Moonie family

The surname Moonie was first found in County Offaly (Irish: Uíbh Fháilí) originally the Kingdom of Uí Failghe, located in central Ireland in the Province of Leinster, where they held a family seat from ancient times.

Early History of the Moonie family

This web page shows only a small excerpt of our Moonie research. Another 66 words (5 lines of text) are included under the topic Early Moonie History in all our PDF Extended History products and printed products wherever possible.

Names from the Middle Ages demonstrate many spelling variations. This is because the recording scribe or church official often decided as to how a person's name was spelt and in what language. Research into the name Moonie revealed many variations, including Mooney, Moony, O'Mooney, Meeny, O'Meany, Meany, O'Meeny, O'Mainy, Meaney and many more.

More information is included under the topic Early Moonie Notables in all our PDF Extended History products and printed products wherever possible.

Moonie Settlers in Australia in the 19th Century