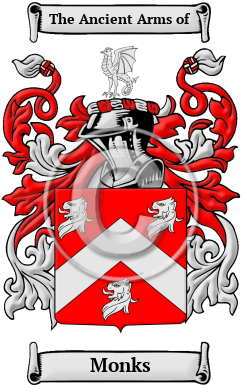 The ancestors of the Monks family migrated to England following the Norman Conquest of 1066. The surname Monks is for a monk. Further research showed the name was derived from the Old English word munuc, of the same meaning, and would indicate that the original bearer was a Monk in the medieval period (celibacy among monks was not generally adopted until the later Middle Ages, so some of them would have had families). On the other hand, the surname may be a nickname to describe someone who was perhaps a recluse.

Early Origins of the Monks family

The surname Monks was first found in Devon where they held a family seat as Lords of the Manor of Potheridge and descended from a Norman noble, Le Moyne, who attended Duke William at the Battle of Hastings in 1066. Conjecturally they are descended from the holder of the lands of Potheridge at the time of the taking of the Domesday Book in 1086, Aubrey from Baldwin the Sheriff of Devon, who held a mare and three clusters of horses at Great and Little Potheridge and Potheridge Gate. William Le Moyne's principal seat was at Dunster Castle. From this distinguished family name are descended the ancient and ardent royalist house of the Dukes of Albermarle.

"The parish of Merton is celebrated as containing the manor of Potheridge, the home for many descents of the family of Monk, made illustrious in their descendant, the famous General. There is some little confusion as to the exact place of [Col. Thomas] Monk's birth (1608), arising from the fact that he was baptized, not at Merton, but at Landcross, a parish some miles distant, adjoining Bideford. Hence he has been variously regarded as being born at Potheridge and at Landcross. However, Potheridge was both the seat of his family and became his own chief residence. The mansion was rebuilt by him for that purpose ; but in greater part was destroyed after the death of the widow of his son Christopher, the second and last duke, in 1734." [1]

Early History of the Monks family

Before the advent of the printing press and the first dictionaries, the English language was not standardized. Sound was what guided spelling in the Middle Ages, so one person's name was often recorded under several variations during a single lifetime. Spelling variations were common, even among the names of the most literate people. Known variations of the Monks family name include Monk, Monks, Monck, Moncks, Monckes and others.

Outstanding amongst the family at this time was George Monck, 1st Duke of Albemarle (1608-1670), English general and statesman, instrumental in the restoration of Charles II to the English throne in 1660; Christopher Monck, 2nd Duke of Albemarle, KG, PC (1653-1688), an English soldier and politician; Nicholas Monck (c...
Another 48 words (3 lines of text) are included under the topic Early Monks Notables in all our PDF Extended History products and printed products wherever possible.

In the United States, the name Monks is the 11,488th most popular surname with an estimated 2,487 people with that name. [2]

Migration of the Monks family to Ireland

Some of the Monks family moved to Ireland, but this topic is not covered in this excerpt.
Another 59 words (4 lines of text) about their life in Ireland is included in all our PDF Extended History products and printed products wherever possible.

Monks migration to the United States +

To escape the political and religious chaos of this era, thousands of English families began to migrate to the New World in search of land and freedom from religious and political persecution. The passage was expensive and the ships were dark, crowded, and unsafe; however, those who made the voyage safely were encountered opportunities that were not available to them in their homeland. Many of the families that reached the New World at this time went on to make important contributions to the emerging nations of the United States and Canada. Research into various historical records has revealed some of first members of the Monks family to immigrate North America:

Monks Settlers in United States in the 17th Century

Monks Settlers in United States in the 19th Century

Monks Settlers in Australia in the 19th Century

Monks Settlers in New Zealand in the 19th Century