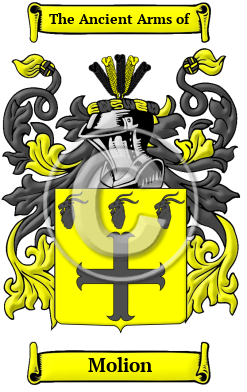 Early Origins of the Molion family

The surname Molion was first found in at Dartington, in Devon, as well as twenty-nine other lordships throughout England. William of Moulins, Sire de Falaise, Lord of Moulins in 1030, in Normandy, uncle of William the Conqueror, was granted many lands by King William. Today Molland is a civil parish and small village in the union and hundred of South Molton comprising 5972 acres.

Further north in Lancashire at Literthland, "Stephen, Earl of Boulogne, who afterwards succeeded to the crown of England, granted to Robert de Molines his land in "Liderlant," for 14s. per annum." [1]

Early History of the Molion family

This web page shows only a small excerpt of our Molion research. Another 97 words (7 lines of text) covering the years 1423, 1617 and 1592 are included under the topic Early Molion History in all our PDF Extended History products and printed products wherever possible.

Spelling variations of this family name include: Mollins, Molyne, Molin, Moilines, Moullin, Moulins and many more.

More information is included under the topic Early Molion Notables in all our PDF Extended History products and printed products wherever possible.

Migration of the Molion family to Ireland

Some of the Molion family moved to Ireland, but this topic is not covered in this excerpt. More information about their life in Ireland is included in all our PDF Extended History products and printed products wherever possible.

Migration of the Molion family

Some of the first settlers of this family name or some of its variants were: William Molline, who settled in Virginia in 1653; John Molin, who settled in Placientia, Newfoundland, in 1681; George Mollins settled in Barbados in 1685.