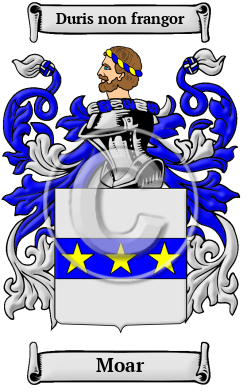 The Moar surname in Scotland is thought to have been a topographic name for someone who resided near a moor, or heath. [1] In Gaelic, Mor means great or big; therefore, a scribe may have mistaken the adjective Mor as a surname More or Muir. This may explain the occurrence of the surname Muir, or a variant in Northern Scotland.

The name Muir would seem out of place in that region because it holds a meaning of "living by a moor or heath," not the typical landscape of the highlands. Judging by its meaning, Muir is a local name of the south that described the area, in which the original bearer lived or held land. [2]

Early Origins of the Moar family

The surname Moar was first found in Ayrshire (Gaelic: Siorrachd Inbhir Àir), formerly a county in the southwestern Strathclyde region of Scotland. Thomas de la More was the executor of the will of Devorguilla de Balliol in 1291. While the first spelling of the name was More, it gradually evolved to Muir which became more popular, and by 1300 the name Muir had become the preferred spelling. Donald, Adam, Renaud, Gilchrist and Simon Muir, all rendered homage on behalf of their Clan to King Edward I of England on his brief conquest of Scotland in 1296.

Early History of the Moar family

Notable amongst the family at this time was Sir William Mure (1594-1657), Scottish writer and politician; John Muir, a Sanskrit scholar, and his brother Sir William Muir, who was an Arabic scholar and biographer of Mohammed; and Edwin Muir (1887-1959), a noted poet and critic. Thomas Muir (1765-1798), parliamentary reformer, was born at Glasgow on 24 Aug. 1765, being the only son of Thomas Muir, a flourishing tradesman, who in 1753 published a pamphlet on England's foreign trade. He was educated at Glasgow grammar school and at the university, intending at first to enter the church, but ultimately deciding on the bar...
Another 156 words (11 lines of text) are included under the topic Early Moar Notables in all our PDF Extended History products and printed products wherever possible.

Migration of the Moar family to Ireland

Some of the Moar family moved to Ireland, but this topic is not covered in this excerpt.
Another 84 words (6 lines of text) about their life in Ireland is included in all our PDF Extended History products and printed products wherever possible.

Moar migration to the United States +

Moar Settlers in United States in the 18th Century

Moar Settlers in United States in the 19th Century

Moar Settlers in United States in the 20th Century

Moar Settlers in Australia in the 19th Century

Moar Settlers in New Zealand in the 19th Century

Historic Events for the Moar family +

Motto: Duris non frangor
Motto Translation: I am not disheartened by difficulties.