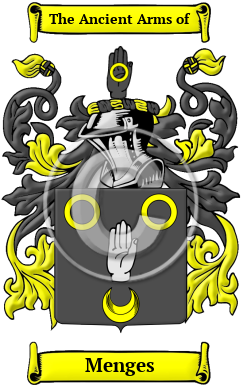 All Irish surnames have a unique and often romantic meaning. The name Menges originally appeared in Gaelic as O Mongain, which is derived from the word mongach, which means hairy.

Early Origins of the Menges family

The surname Menges was first found in Connacht (Irish: Connachta, (land of the) descendants of Conn), where they held a family seat and styled as one of the Irish Clanns who were descendants of King Niall of the Nine Hostages. They were descended through Eochy Moyvane, to Niall Mor, his son, the great Niall of the Nine Hostages. Descended was O'Mongain the great chief of the Mangans whose territories included branches in Mayo, Connacht, Cork and Limerick.

Early History of the Menges family

This web page shows only a small excerpt of our Menges research. Another 83 words (6 lines of text) covering the years 1772, 1852 and 1803 are included under the topic Early Menges History in all our PDF Extended History products and printed products wherever possible.

Numerous spelling variations of the surname Menges exist. A partial explanation for these variants is that ancient scribes and church officials recorded names as they were pronounced, often resulting in a single person being recorded under several different spellings. Different spellings that were found include O' Mongain (Gaelic), Mangan, Mongan, Mongin, Mungan, Mungen, Mongun, O'Mongan, O'Mongin, O'Mungen, O'Mongun, O'Mongun, O'Mangan and many more.

More information is included under the topic Early Menges Notables in all our PDF Extended History products and printed products wherever possible.

In the United States, the name Menges is the 14,238th most popular surname with an estimated 2,487 people with that name. [1]

Menges migration to the United States +

Irish families began to immigrate to British North America and the United States in the 18th century, but the greatest influx of Irish immigrants came during the Great Potato Famine of the late 1840s. The earlier settlers came to North America after a great deal of consideration and by paying relatively high fees for their passage. These settlers were primarily drawn by the promise of land. Those later settlers that came during the 1840's were trying to escape the conditions of poverty, starvation, disease, and death that had stricken Ireland. Due to the enormity of their numbers and the late date of their arrival, these immigrants primarily became hired laborers instead of homesteading settlers like their predecessors. An exhaustive search of immigration and passenger lists has revealed many Irish immigrants North America bearing the name Menges:

Menges Settlers in United States in the 18th Century

Menges Settlers in United States in the 19th Century

Menges Settlers in New Zealand in the 19th Century