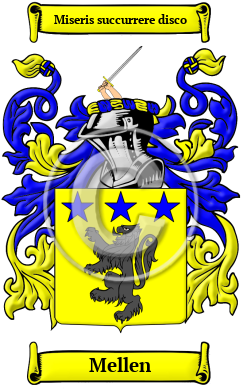 In ancient Scotland, the ancestors of the name Mellen lived in the Kingdom of Dalriada. In those days the name Mellen was used to indicate a person who bald person; the name may refer to a member of a religious order. The Gaelic forms of the name are Mac Mhaolain or Mac Ghille Mhaoil, both of which mean son of the bald or tonsured one.

Early Origins of the Mellen family

The surname Mellen was first found in at Tayside, where in 1263 Cilleonan MacMolan appears on documents. [1] They arrived in Strathtay from the lands in Loch Arkaig after King Malcolm IV transplanted many Clans, including the MacMillans, from that region about 1160 AD. Later, about 1350, the Camerons, who had changed their name to Chalmers, drove them from their Strathtay territories.

Early History of the Mellen family

The translation of Gaelic names in the Middle Ages was not a task undertaken with great care. Records from that era show an enormous number of spelling variations, even in names referring to the same person. Over the years Mellen has appeared as MacMillan, MacMullan, MacMullen, McMullen, McMullin, McMullan, McMillan, MacMullin and many more.

Notable amongst the Clan from early times was Sir Duncan Macmolane, a Pope's knight, chaplain of the collegiate church of Kilmone, 1452; John Macmulan (Makmilane, or Makmylan), bailie (baillie) of Glasgow in 1454; Sir Fingon Makmulane, who was presented in 1540 to the chaplainry of Tibbermore in the diocese of...
Another 49 words (4 lines of text) are included under the topic Early Mellen Notables in all our PDF Extended History products and printed products wherever possible.

In the United States, the name Mellen is the 10,595th most popular surname with an estimated 2,487 people with that name. [2]

Migration of the Mellen family to Ireland

Some of the Mellen family moved to Ireland, but this topic is not covered in this excerpt.
Another 89 words (6 lines of text) about their life in Ireland is included in all our PDF Extended History products and printed products wherever possible.

Mellen migration to the United States +

The descendants of the Dalriadan families who made the great crossing of the Atlantic still dot communities along the east coast of the United States and Canada. In the American War of Independence, many of the settlers traveled north to Canada as United Empire Loyalists. Clan societies and highland games have allowed Canadian and American families of Scottish descent to recover much of their lost heritage. Investigation of the origins of family names on the North American continent has revealed that early immigrants bearing the name Mellen or a variant listed above include:

Mellen Settlers in United States in the 17th Century

Mellen Settlers in United States in the 19th Century

Mellen Settlers in Canada in the 18th Century

Mellen Settlers in Australia in the 19th Century

Mellen Settlers in New Zealand in the 19th Century