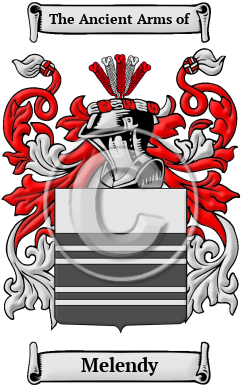 Melendy is a name that came to England in the 11th century wave of migration that was set off by the Norman Conquest of 1066. Melendy comes from the Old Norman personal name Melmor. The name Mellanby was also the name of several places in Cumberland and the North Riding of Yorkshire. The family name Melendy was brought to England after the Norman Conquest, when William the Conqueror gave his friends and relatives most of the land formerly owned by Anglo-Saxon aristocrats.

Early Origins of the Melendy family

The surname Melendy was first found in Yorkshire where they held a family seat as Lord of the Manor of the large village of Malmerbi or Melmerby, near Hutton Conyers. At the time of the taking of the Domesday Book in 1086, a survey of all England taken by Duke William to record the ownership of all taxable land in England, Melmerby was held by Count Alan, and, conjecturally, it is from this family the surname is descended. Melmerbi is given by Cottle as "farm of the devotee of (St) Mary" but this shows an Irish origin which is unsupported. Count Allan also held Wensleydale, south of Richmond. He was anciently a Breton, known as Allan the Black, distinguishing him from Duke Allan the Red, his brother. It was customary amongst the Norman families who introduced surnames into England after the Conquest, to name their sons, nephews and so on, by the name of the Manors which they held so as to distinguish these descendents from the main line.

Early History of the Melendy family

This web page shows only a small excerpt of our Melendy research. Another 27 words (2 lines of text) covering the years 1316 and 1412 are included under the topic Early Melendy History in all our PDF Extended History products and printed products wherever possible.

More information is included under the topic Early Melendy Notables in all our PDF Extended History products and printed products wherever possible.

In the United States, the name Melendy is the 17,236th most popular surname with an estimated 2,487 people with that name. [1]

Migration of the Melendy family to Ireland

Some of the Melendy family moved to Ireland, but this topic is not covered in this excerpt.
Another 60 words (4 lines of text) about their life in Ireland is included in all our PDF Extended History products and printed products wherever possible.

Migration of the Melendy family

The unstable environment in England at this time caused numerous families to board ships and leave in search of opportunity and freedom from persecution abroad in places like Ireland, Australia, and particularly the New World. The voyage was extremely difficult, however, and only taken at great expense. The cramped conditions and unsanitary nature of the vessels caused many to arrive diseased and starving, not to mention destitute from the enormous cost. Still opportunity in the emerging nations of Canada and the United States was far greater than at home and many went on to make important contributions to the cultures of their adopted countries. An examination of many early immigration records reveals that people bearing the name Melendy arrived in North America very early: John and Joseph Mallenbray arrived in New York in 1790.