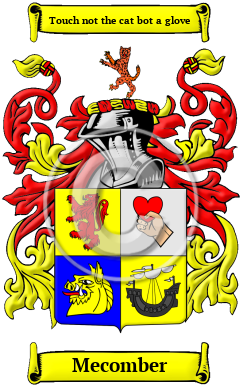 The Mecomber surname comes from the Gaelic MacComaidh, which is in turn from MacThomaidh or MacThom. The same Gaelic names have often been Anglicized Thomson.

Early Origins of the Mecomber family

The surname Mecomber was first found in Perthshire (Gaelic: Siorrachd Pheairt) former county in the present day Council Area of Perth and Kinross, located in central Scotland, where they held a family seat from very ancient times.

Early History of the Mecomber family

This web page shows only a small excerpt of our Mecomber research. Another 125 words (9 lines of text) covering the years 1526, 1571, and 1587 are included under the topic Early Mecomber History in all our PDF Extended History products and printed products wherever possible.

More information is included under the topic Early Mecomber Notables in all our PDF Extended History products and printed products wherever possible.

Migration of the Mecomber family to Ireland

Some of the Mecomber family moved to Ireland, but this topic is not covered in this excerpt.
Another 60 words (4 lines of text) about their life in Ireland is included in all our PDF Extended History products and printed products wherever possible.

Migration of the Mecomber family

Some of the first settlers of this family name or some of its variants were: John Maccome, who settled in Virginia in 1653; Alexander MacComb, who came to New York in 1774; Mary MacComb settled in Charles Town [Charleston], South Carolina in 1763.