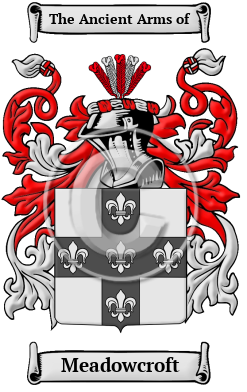 Meadowcroft is a name whose history is connected to the ancient Anglo-Saxon tribes of Britain. The name is derived from when the Meadowcroft family once lived in the estate of Meadowcroft, which was in the parish of Middleton in the county of Lancashire. The surname Meadowcroft belongs to the large category of Anglo-Saxon habitation names, which are derived from pre-existing names for towns, villages, parishes, or farmsteads.

Early Origins of the Meadowcroft family

The surname Meadowcroft was first found in Lancashire where they held a family seat from very ancient times, some say soon after the Norman Conquest in 1066 A.D. Meadowcroft is a small estate in the parish of Middleton near Manchester.

Early History of the Meadowcroft family

This web page shows only a small excerpt of our Meadowcroft research. Another 77 words (6 lines of text) covering the years 1379 and 1581 are included under the topic Early Meadowcroft History in all our PDF Extended History products and printed products wherever possible.

More information is included under the topic Early Meadowcroft Notables in all our PDF Extended History products and printed products wherever possible.

Meadowcroft migration to the United States +

For political, religious, and economic reasons, thousands of English families boarded ships for Ireland, Canada, the America colonies, and many of smaller tropical colonies in the hope of finding better lives abroad. Although the passage on the cramped, dank ships caused many to arrive in the New World diseased and starving, those families that survived the trip often went on to make valuable contributions to those new societies to which they arrived. Early immigrants bearing the Meadowcroft surname or a spelling variation of the name include:

Meadowcroft Settlers in United States in the 19th Century

Meadowcroft Settlers in United States in the 20th Century

Meadowcroft Settlers in Australia in the 19th Century