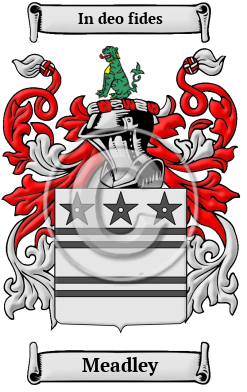 The history of the Meadley family goes back to the ancient Anglo-Saxon culture of Britain. It is derived from the family living in place name Madeley (Staffordshire and Shropshire), Medley in Oxfordshire [1] or a Madely in Gloucestershire. [2] The reason for the multiple local names is because the name generally means "woodland clearing of a man called Mada," from the Old English personal name + "leah." [3]

The one exception is Madeley-Market in Shropshire where "the name of this town indicates its situation between two rivers, and the adjunct arose from the grant of a market here, in the time of Henry III., to a community of Cluniac monks at Wenlock, to whom Madeley belonged." [4] Madley is a small parish, in the union of Dore, hundred of Webtree, in Herefordshire. [4]

Early Origins of the Meadley family

The surname Meadley was first found in Somerset where Simon atte Middele was listed there 1 Edward I (during the first year of the reign of King Edward I.) [6]

Early History of the Meadley family

Until quite recently, the English language has lacked a definite system of spelling rules. Consequently, Anglo-Saxon surnames are characterized by a multitude of spelling variations. Changes in Anglo-Saxon names were influenced by the evolution of the English language, as it incorporated elements of French, Latin, and other languages. Although Medieval scribes and church officials recorded names as they sounded, so it is common to find one person referred to by several different spellings of his surname, even the most literate people varied the spelling of their own names. Variations of the name Meadley include Medley, Medleigh, Madley, Madleigh, Medlie, Medlee and many more.

Distinguished members of the family include Henry Medley (d. 1747), British Vice-Admiral who entered the navy in 1703; was in 1706 a midshipman of the Somerset with Captain Price at the relief of Barcelona; passed his examination on 8 Feb. 1709-1710 (passing certificate); and on 5 Sept. 1710 was promoted by Sir John Norris to be Lieutenant of the Fame, from which a few months later he was moved into the Stirling Castle. In 1717 he was a lieutenant of the Barfleur, flagship of Sir George Byng in the Baltic. Early in 1720 he was promoted to the command of the...
Another 131 words (9 lines of text) are included under the topic Early Meadley Notables in all our PDF Extended History products and printed products wherever possible.

Migration of the Meadley family

Searching for a better life, many English families migrated to British colonies. Unfortunately, the majority of them traveled under extremely harsh conditions: overcrowding on the ships caused the majority of the immigrants to arrive diseased, famished, and destitute from the long journey across the ocean. For those families that arrived safely, modest prosperity was attainable, and many went on to make invaluable contributions to the development of the cultures of the new colonies. Research into the origins of individual families in North America revealed records of the immigration of a number of people bearing the name Meadley or a variant listed above: the name represented in many forms and recorded from the mid 17th century in the great migration from Europe. Migrants settled in the eastern seaboard from Newfoundland, to Maine, to Virginia, the Carolinas, and to the islands..