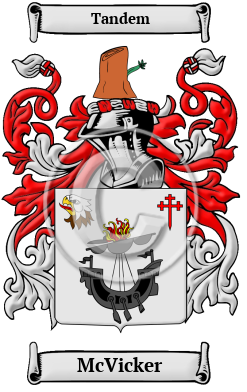 The name McVicker comes from the ancient Scottish kingdom of Dalriada, where it was used to indicate someone who worked as a son of a vicar, who was a priest in charge of a parish in which most or all of the tithes were paid to another recipient, while the vicar received a stipend. The Gaelic form of the surname is Mac a Bhiocair.

Early Origins of the McVicker family

The surname McVicker was first found in Argyllshire (Gaelic erra Ghaidheal), the region of western Scotland corresponding roughly with the ancient Kingdom of Dál Riata, in the Strathclyde region of Scotland, now part of the Council Area of Argyll and Bute, where they held a family seat from early times and their first records appeared on the early census rolls taken by the early Kings of Scotland to determine the rate of taxation of their subjects.

Early History of the McVicker family

This web page shows only a small excerpt of our McVicker research. Another 114 words (8 lines of text) covering the years 1400 and 1685 are included under the topic Early McVicker History in all our PDF Extended History products and printed products wherever possible.

Since medieval scribes still spelled according to sound, records from that era contain an enormous number of spelling variations. In various documents McVicker has been spelled MacVicar, MacViccar, MacVicker, MacVicer, MacWicar and many more.

More information is included under the topic Early McVicker Notables in all our PDF Extended History products and printed products wherever possible.

In the United States, the name McVicker is the 11,184th most popular surname with an estimated 2,487 people with that name. [1]

Migration of the McVicker family to Ireland

Some of the McVicker family moved to Ireland, but this topic is not covered in this excerpt.
Another 59 words (4 lines of text) about their life in Ireland is included in all our PDF Extended History products and printed products wherever possible.

McVicker migration to the United States +

Descendents of Dalriadan-Scottish families still populate many communities across North America. They are particularly common in Canada, since many went north as United Empire Loyalists at the time of the American War of Independence. Much later, in the late 19th and early 20th centuries, the highland games and Clan societies that now dot North America sprang up, allowing many Scots to recover their lost national heritage. Some of the first immigrants to cross the Atlantic and come to North America bore the name McVicker, or a variant listed above:

McVicker Settlers in United States in the 19th Century

McVicker Settlers in Canada in the 18th Century

McVicker Settlers in New Zealand in the 19th Century