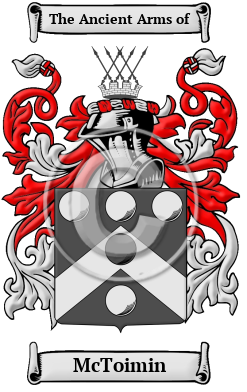 The ancestors of the McToimin surname in Ireland are thought to have arrived with or in the wake of the 12th century Anglo/ Norman invasion of the Emerald Isle, led by Strongbow. The surname McToimin is ultimately derived from the personal names Timothy or Thomas. The Gaelic form of the surname McToimin is Mac Toimin.

Early Origins of the McToimin family

The surname McToimin was first found in counties Wicklow and Carlow (Irish: Cheatharlach) a small landlocked area located in the province of Leinster in the South East of Ireland, from 1172. Timon of Athens ( fl. 431 BC) was a citizen of Athens whose misanthropy grew to legendary status. He was the inspiration for Shakespeare's Timon of Athens (The Life of Tymon of Athens), one of his first tragedies.

Early History of the McToimin family

This web page shows only a small excerpt of our McToimin research. Another 66 words (5 lines of text) covering the years 117 and 1172 are included under the topic Early McToimin History in all our PDF Extended History products and printed products wherever possible.

During the lifetime of an individual person, his name was often spelt by church officials and medieval scribes the way it sounded. An examination of the many different origins of each name has revealed many spelling variations for the name: Timmons, Timmins, O'Timmon, O'Timmons, Tymon, McToimin and many more.

More information is included under the topic Early McToimin Notables in all our PDF Extended History products and printed products wherever possible.

Migration of the McToimin family

Ireland's Great Potato Famine left the country's inhabitants in extreme poverty and starvation. Many families left their homeland for North America for the promise of work, freedom and land ownership. Although the Irish were not free of economic and racial discrimination in North America, they did contribute greatly to the rapid development of bridges, canals, roads, and railways. Eventually, they would be accepted in other areas such as commerce, education, and the arts. An examination of immigration and passenger lists revealed many bearing the name McToimin: Margaret Timmins from St. Mullins in Carlow who settled in St. John's, Newfoundland, in 1819; Lawrence Timmons settled in Harbour Grace, Newfoundland, in 1822.