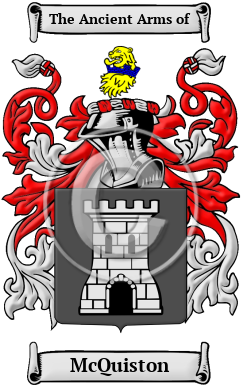 The story of the McQuiston family stretches back through time to the Viking settlers who populated the rugged shores of Scotland in the Medieval era. The name McQuiston was derived from Huchon, a diminutive form of Hugh. [1] Patronymic surnames arose out of the vernacular and religious given name traditions. This name is the equivalent of Hugh in the vernacular of Scotland. Today, the plural form of the name is more popular as in "Hutchins" or "Hutchens," but years ago the singular form was far more common.

Early Origins of the McQuiston family

The surname McQuiston was first found in Ross-shire (Gaelic: Siorrachd Rois), a former county now part of the Council Areas of Highland and Western Isles in Northern Scotland, which emerged from the Gaelic lordship of the Earl of Ross, where they held a family seat from very ancient times.

Early History of the McQuiston family

Spelling variations are extremely common among Scottish names dating from this era because the arts of spelling and translation were not yet standardized. Spelling was done by sound, and translation from Gaelic to English was generally quite careless. In different records, McQuiston has been spelled Hutchins, Hutchings, Hutchin, Hutcheon, Huchens, Hutcheons, Hutchon, Houchin, Houchen, Houchens, MacCutcheon, MacQuestion and many more.

Notable amongst the Clan from early times was Edward Hutchins (1558?-1629), English divine, born about 1558 of poor parents, was, according to Wood, a native of Denbighshire. About 1576 he matriculated at Brasenose College, Oxford: he graduated B.A. 1577, and proceeded M.A. 1581 and B.D. 1590. [5] Sir George Hutchins (d. 1705), king's...
Another 52 words (4 lines of text) are included under the topic Early McQuiston Notables in all our PDF Extended History products and printed products wherever possible.

In the United States, the name McQuiston is the 9,211st most popular surname with an estimated 2,487 people with that name. [6]

Migration of the McQuiston family to Ireland

Some of the McQuiston family moved to Ireland, but this topic is not covered in this excerpt.
Another 71 words (5 lines of text) about their life in Ireland is included in all our PDF Extended History products and printed products wherever possible.

McQuiston migration to the United States +

Those who made the voyage were greeted with ample opportunity to acquire land and a political climate far away from the oppressive monarchy of the old country. They settled along the east coast of what would become Canada and the United States. In the American War of Independence, those who remained loyal to England traveled north to Canada as United Empire Loyalists. In this century, many Scots living in North America have begun to recover their rich heritage through festivals, highland games, and Clan societies. An examination of passenger and immigration lists has shown early immigrants bearing the name McQuiston:

McQuiston Settlers in United States in the 18th Century

McQuiston Settlers in United States in the 19th Century

McQuiston Settlers in Canada in the 18th Century