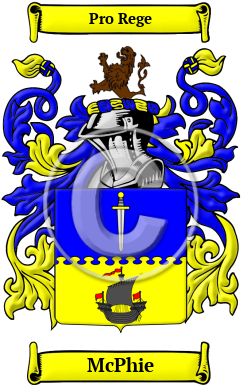 Scotland's coastal mountains and Hebrides islands were known in ancient times as the kingdom of Dalriada. The name McPhie evolved there as a nickname for a dark-featured, peaceful person. The Gaelic name of the Clan is Mac Dubhshithe, which translates as black one of peace. One branch of the Clan on the island of North Uist was known as Dubh-sidh, meaning 'black fairy,' due to their whimsical association with the faerie folk.

Early Origins of the McPhie family

The surname McPhie was first found in on the Isle of Colonsay, where the eponymous ancestor of the Clan may be Dubhshith, also called Dubside, who was lector at the Cathedral on the sacred isle of Iona in 1164. As the name MacFee is one of the oldest of all Dalriadan surnames it appears in records as early as the reign of Alexander II, when Johannes Macdufthi was witness to a charter in Dumfriesshire. In 1296, Thomas Macdoffy swore an oath of allegiance to the king.

Early History of the McPhie family

This web page shows only a small excerpt of our McPhie research. Another 226 words (16 lines of text) covering the year 1838 is included under the topic Early McPhie History in all our PDF Extended History products and printed products wherever possible.

Spelling in the medieval era was a highly imprecise process. Translation, particularly from Gaelic to English, was little better. For these reasons, early Scottish names are rife with spelling variations. In various documents McPhie has been spelled MacFie, McFey, MacFee, MacDuffie, MacPhee, MacGuffie, MacCuffie, MacPhie, Maffie, Maffey, MacDubh-shithe (Gaelic) and many more.

More information is included under the topic Early McPhie Notables in all our PDF Extended History products and printed products wherever possible.

Migration of the McPhie family to Ireland

Some of the McPhie family moved to Ireland, but this topic is not covered in this excerpt.
Another 89 words (6 lines of text) about their life in Ireland is included in all our PDF Extended History products and printed products wherever possible.

McPhie migration to the United States +

Many settled along the east coast of what would become the United States and Canada. As the American War of Independence broke out, those who remained loyal to the crown went north to Canada as United Empire Loyalists. The ancestors of all of these hardy Dalriadan-Scottish settlers began to recover their collective history in the 20th century with the advent of the vibrant culture fostered by highland games and Clan societies in North America. Highland games, clan societies, and other organizations generated much renewed interest in Scottish heritage in the 20th century. The McPhie were among the earliest of the Scottish settlers as immigration passenger lists have shown:

McPhie Settlers in United States in the 19th Century

McPhie Settlers in United States in the 20th Century

McPhie Settlers in Australia in the 19th Century