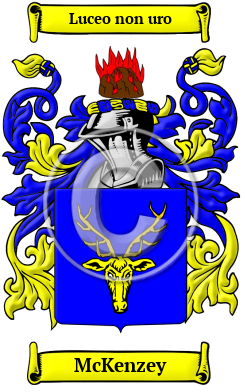 The root of the ancient Dalriadan-Scottish name McKenzey is the personal name Coinneach. The Gaelic form of the name is Mac Coinnich or Mac Choinnich, both of which mean son of Coinneach. However, In Adamnan, the Gaelic form of the name is Cainnechus, which is derived from the word cann, meaning fair or bright; thus, the surname is of the 'nickname' variety in this case.

Early Origins of the McKenzey family

The surname McKenzey was first found in Ross-shire (Gaelic: Siorrachd Rois) a former county, now part of the Council Areas of Highland and Western Isles in Northern Scotland, which emerged from the Gaelic lordship of the Earl of Ross, where they held a family seat from early times and their first records appeared on the early census rolls taken by the early Kings of Britain to determine the rate of taxation of their subjects.

Early History of the McKenzey family

The translation of Gaelic names in the Middle Ages was not a task undertaken with great care. Records from that era show an enormous number of spelling variations, even in names referring to the same person. Over the years McKenzey has appeared as MacKenzie, McKenzie, Kennethson, Kenneth, Kennieson, MacCoinnich (Gaelic), MacWhinnie, MacWhinny, MacWhinney and many more.

Migration of the McKenzey family to Ireland

Some of the McKenzey family moved to Ireland, but this topic is not covered in this excerpt.
Another 57 words (4 lines of text) about their life in Ireland is included in all our PDF Extended History products and printed products wherever possible.

McKenzey Settlers in Australia in the 19th Century