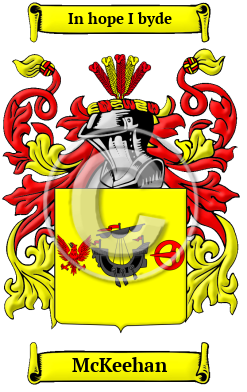 The sea-swept Hebrides islands and the west coast of Scotland, made up the ancient Dalriadan kingdom, the ancestral home of the McKeehan family. Their name comes from the given name Ian or John. John is the most common personal name in the Highlands. The Gaelic form of the name is Mac Iain.

Early Origins of the McKeehan family

The surname McKeehan was first found in Argyllshire (Gaelic erra Ghaidheal), the region of western Scotland corresponding roughly with the ancient Kingdom of Dál Riata, in the Strathclyde region of Scotland, now part of the Council Area of Argyll and Bute, where they held a family seat from early times and their first records appeared on the early census rolls taken by the early Kings of Britain to determine the rate of taxation of their subjects.

Early History of the McKeehan family

Many spelling variations of McKeehan have been recorded over the years, including These are the result of the medieval practice of spelling according to sound and repeated translation between Gaelic and English. MacIan, MacAne, MacKane, MacKean, MacKain and others.

Notable amongst the Clan from early times was Archibald McKain (1717-1777), Scottish Shoemaker and Burgess of Elgin, Morayshire, who became the 15th Chief of MacIain of Ardnamurchan. Also of note was Thomas M'kean of Delaware, one of the signers of the American Declaration of Independence. John Canne (d. 1667?)...
Another 48 words (3 lines of text) are included under the topic Early McKeehan Notables in all our PDF Extended History products and printed products wherever possible.

In the United States, the name McKeehan is the 9,422nd most popular surname with an estimated 2,487 people with that name. [1]

Migration of the McKeehan family to Ireland

Some of the McKeehan family moved to Ireland, but this topic is not covered in this excerpt.
Another 80 words (6 lines of text) about their life in Ireland is included in all our PDF Extended History products and printed products wherever possible.

Migration of the McKeehan family

Many who arrived from Scotland settled along the east coast of North America in communities that would go on to become the backbones of the young nations of the United States and Canada. In the American War of Independence, many settlers who remained loyal to England went north to Canada as United Empire Loyalists. Their descendants later began to recover the lost Scottish heritage through events such as the highland games that dot North America in the summer months. Research into various historical records revealed some of first members of the McKeehan family emigrate to North America: John MacKane settled in Carolina in 1806; Alexander, John, Peter, Thomas MacKane all arrived in Philadelphia between 1840 and 1860; James MacKean settled in Carolina in 1767.