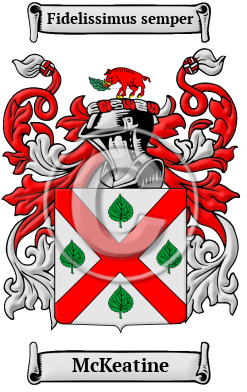 Although Ireland already had an established system of hereditary surnames, the Strongbownians brought many of their own naming traditions to the island. There were, however, similarities between the two systems. The Strongbownians, like the Irish, frequently used patronymic surnames, a form of surname that was built from the name of the initial bearer's father, or another older relative. Norman patronymic names, because they were originally formed in French, were often created by the addition of a diminutive suffix to the given name, such as "-ot," "-et," "-un," "-in," or "-el." Occasionally, two suffixes were combined to form a double diminutive, as in the combinations of "-el-in," "-el-ot," "-in-ot," and "-et-in." These Stronbownians also created patronymic names by the prefix "Fitz-," which was derived from the French word "fils," and ultimately from the Latin "filius," which both mean "son." This prefix probably originated in Flanders or Normandy, it has disappeared from France entirely but remains common in Ireland even today. The Strongbownian surname of McKeatine is derived from the Old English personal name Cyting. The Gaelic form of the surname McKeatine is Céitinn. The indigenous Keaty family of Ireland, whose Gaelic name is O Céatfhadha, occasionally assumed the surname McKeatine. [1]

Early Origins of the McKeatine family

The surname McKeatine was first found in County Wexford (Irish: Loch Garman), founded by Vikings as Waesfjord, and located in Southeastern Ireland, in the province of Leinster.

Early History of the McKeatine family

Medieval scribes and church officials spelt names simply the way they sounded, which explains the various name spelling variations of the name McKeatine that were encountered when researching that surname. The many spelling variations included: Keating, Keaty, Keeting, MacKeating and others.

Notable amongst the family up to this time was Seathrún Céitinn, (English: Geoffrey Keating), (c. 1569-1644), Irish Roman Catholic priest, poet and historian from Tipperary, buried in Tubrid Graveyard in the parish of Ballylooby-Duhill. "After education in a school near his birthplace, where Irish literature was taught, he was sent abroad for his university education. The name of 'P. Geofroy Ketting, docteur en theologie, Vatterford,' appears in a list of Irish priests who were protected and educated by the Archbishop of Bordeaux at Bordeaux between 1605 and 1621. Keating certainly returned to Ireland as a priest after an...
Another 97 words (7 lines of text) are included under the topic Early McKeatine Notables in all our PDF Extended History products and printed products wherever possible.

Migration of the McKeatine family

A great number of Irish families left their homeland in the late 18th century and throughout the 19th century, migrating to such far away lands as Australia and North America. The early settlers left after much planning and deliberation. They were generally well off but they desired a tract of land that they could farm solely for themselves. The great mass of immigrants to arrive on North American shores in the 1840s differed greatly from their predecessors because many of them were utterly destitute, selling all they had to gain a passage on a ship or having their way paid by a philanthropic society. These Irish people were trying to escape the aftermath of the Great Potato Famine: poverty, starvation, disease, and, for many, ultimately death. Those that arrived on North American shores were not warmly welcomed by the established population, but they were vital to the rapid development of the industry, agriculture, and infrastructure of the infant nations of the United States and what would become Canada. Early passenger and immigration lists reveal many Irish settlers bearing the name McKeatine: Daniel, David, James, John, Michael, Patrick, Peggy, Peter, Thomas and William Keating all arrived in Pennsylvania between 1840 and 1860. In Newfoundland, Michael settled in Harbour Main in 1750.