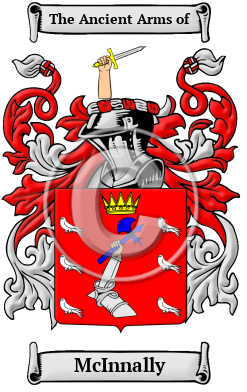 The original Gaelic form of McInnally was Mac an Fhailghigh, which is derived from the word failgheach, which means poor man.

Early Origins of the McInnally family

The surname McInnally was first found in counties Armagh and Monaghan (Irish: Muineachán) located in the Northern part of the Republic of Ireland in the province of Ulster, where they held a family seat from ancient times.

Early History of the McInnally family

This web page shows only a small excerpt of our McInnally research. Another 100 words (7 lines of text) covering the years 1120, 1653, 1680 and 1697 are included under the topic Early McInnally History in all our PDF Extended History products and printed products wherever possible.

Pronunciation, rather than spelling, guided scribes and church officials when recording names during the Middle Ages. This practice often resulted in one person's name being recorded under several different spellings. Numerous spelling variations of the surname McInnally are preserved in these old documents. The various spellings of the name that were found include McNally, McAnully, McAnalley, McAnally and others.

Another 48 words (3 lines of text) are included under the topic Early McInnally Notables in all our PDF Extended History products and printed products wherever possible.

McInnally Settlers in Australia in the 19th Century