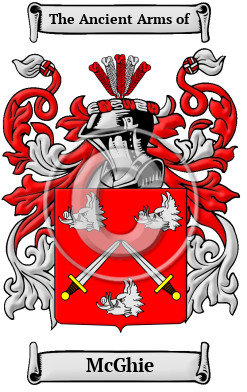 The roots of the McGhie family stretch back to the Strathclyde people of the Scottish/English Borderlands, who were the first to use this surname. It is derived from the Gaelic name Aodh, meaning Hugh, and the word mac, meaning son of. [1]

Early Origins of the McGhie family

The surname McGhie was first found in Dumfriesshire (Gaelic: Siorrachd Dhùn Phris), a Southern area, bordering on England that today forms part of the Dumfries and Galloway Council Area.

The first on record was Gilmighel Mac Ethe of Dumfries who rendered homage to King Edward I in 1296. "In the following year, as Gille Michel MacGethe, he was thanked by Edward I for putting down evildoers and for other services. Neel McEthe, Gillecryst McEthe, Hoen McEthe, Cuthbert his brother, and all of the lineage of Clenafren, made submission to Edward I in 1298. Michael Macgethe was juror on an inquisition in Annandale, 1304." [2]

Early History of the McGhie family

Before the printing press standardized spelling in the last few hundred years, no general rules existed in the English language. Spelling variations in Scottish names from the Middle Ages are common even within a single document. McGhie has been spelled MacGee, MacGhie, MacGhee, Magee and others.

Notable amongst the family at this time was Gilbert M'Ghie, 1st Lord of Balmage (d. 1426); Gilbert M'Gy, 2nd Lord of Balmage (1426-1471); William M'Gye of Balmage and...
Another 26 words (2 lines of text) are included under the topic Early McGhie Notables in all our PDF Extended History products and printed products wherever possible.

In the United States, the name McGhie is the 15,125th most popular surname with an estimated 2,487 people with that name. [3]

Migration of the McGhie family to Ireland

Some of the McGhie family moved to Ireland, but this topic is not covered in this excerpt.
Another 82 words (6 lines of text) about their life in Ireland is included in all our PDF Extended History products and printed products wherever possible.

McGhie migration to the United States +

McGhie Settlers in United States in the 17th Century

McGhie Settlers in United States in the 19th Century

McGhie Settlers in Australia in the 19th Century

McGhie Settlers in New Zealand in the 19th Century