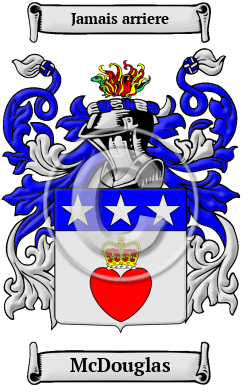 The ancestors of the first family to use the name McDouglas lived among the ancient Scottish people called the Picts. The McDouglas family lived in Moray, where the family has a long and distinguished history dating back to early times. Some claim the name is derived from a knight of 770 who after aiding King Solvathius of Scotland in his great battle with Donald Bain, King of the Western Isles was granted the lands of Clydesdale. Others claim the name was originally derived from Theobaldus, a Flemming and were granted the lands of Douglas Water. In Gaelic, the name is Dudhglas means "black stream."

Early Origins of the McDouglas family

The surname McDouglas was first found in Moray, where the progenitor of the Clan is thought to be Archibald of Douglasdale (1198-1239). The Douglasses of Drumlanrig claim descent from Sir William Douglas, who was granted the lands of Drumlanrig in 1412 by King James I.

Early History of the McDouglas family

In the Middle ages, spelling and translation were not yet regulated by any general rules. spelling variations in names were common even among members of one family unit. McDouglas has appeared Douglas, Douglass, Dougliss, Dougless, Dowglas, Duglas, Duglass and many more.

Notable amongst the Clan at this time was Archibald Douglas, (1328-1400), 3rd Earl of Douglas, Earl of Wigtown, Lord of Douglas, Lord of Bothwell and Lord of Galloway, a late medieval Scottish magnate; George Douglas, 1st Earl of Angus (1380-1403), mediaeval Scottish nobleman; Isabel Douglas, Countess of Mar (c. 1360-1408), inherited most of brothers property, excluding only the Douglas lands which could only pass through the male line, she became the most sought after bride in the realm and soon was married to Sir Malcolm Drummond, marriage however failed to produce any children and the Countess soon became the focus of...
Another 354 words (25 lines of text) are included under the topic Early McDouglas Notables in all our PDF Extended History products and printed products wherever possible.

Migration of the McDouglas family to Ireland

Some of the McDouglas family moved to Ireland, but this topic is not covered in this excerpt.
Another 59 words (4 lines of text) about their life in Ireland is included in all our PDF Extended History products and printed products wherever possible.

Migration of the McDouglas family

Faced by this persecution and the generally unstable political climate of those days, many Scots chose to leave their homeland for Ireland, Australia, and North America in search of greater opportunity and freedom. The colonies across the Atlantic were the most popular choice, but a passage there was neither cheap nor easily suffered. Passengers arrived sick and poor, but those who made it intact often found land and more tolerant societies in which to live. These brave settlers formed the backbone of the burgeoning nations of Canada and the United States. It is only this century that the ancestors of these families have begun to recover their collective identity through the patriotic highland games and Clan societies that have sprung up throughout North America. Research into early immigration and passenger lists revealed many immigrants bearing the name McDouglas: Charles Douglas who settled in New Jersey in 1685; Hugh Douglas settled in Virginia in 1635; John Douglas settled in Virginia in 1655; Lee William Douglas settled in Virginia in 1655.