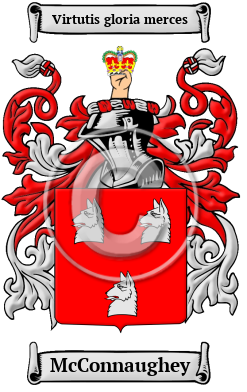 The Hebrides islands and the west coast of Scotland are the ancestral home of the McConnaughey family. Their name comes from the personal name Robert. Known as the Clan Donnachaidh, the family's origins are very distinguished, as the senior branch of the line were the hereditary abbots of Dunkeld, who traced their descent from Iona. In addition, Abbot Duncan of Dunkeld, the Robertson progenitor, was killed in battle in 964, as he led the warriors, bearing, a reliquary of St. Columba. His grandson, Abbot Crinan of Dunkeld, married the Kings daughter and then fathered King Duncan I of Scotland who was killed by MacBeth (of Shakespearean fame). Crinan is buried at the Isle of lona, burial place of Scotland's early Kings.

Early Origins of the McConnaughey family

The surname McConnaughey was first found in Atholl. King Duncan's younger son, Maelmore, sired Madadh, Earl of Atholl, and his grandson, Earl Henry, was father to Conan who held vast territories in this area. Conan of Glenerochie was the first Chief of the Robertsons and gave his name to the Clan Connchaidh or Duncan. His successor, Duncan, the 5th Chief, led the Clan in the army of King Bruce at Bannockburn in 1314 against the English. For this service, and his subsequent staunch support of the Scottish Crown, his grandson Robert of Struan was granted the lands and barony in 1451.

Early History of the McConnaughey family

Medieval translation of Gaelic names could not be referred to as an accurate process. Spelling was not yet standardized, and names in documents from that era are riddled with spelling variations. McConnaughey has been written as Robertson, MacConachie, Maconachie, MacConaghy, MacConchie, MacConckey, MacConkey, MacDonnachie, MacDonachie, MacDunnachie, MacInroy, MacLagan, Mac Raibeirt (Gaelic) and many more.

Another 38 words (3 lines of text) are included under the topic Early McConnaughey Notables in all our PDF Extended History products and printed products wherever possible.

Migration of the McConnaughey family to Ireland

Some of the McConnaughey family moved to Ireland, but this topic is not covered in this excerpt.
Another 64 words (5 lines of text) about their life in Ireland is included in all our PDF Extended History products and printed products wherever possible.

Migration of the McConnaughey family

Ancestors of many of the Dalriadan families who crossed the Atlantic still live along the east coast of the United States and Canada. Some Scottish settlers arrived in Canada during the American War of Independence as United Empire Loyalists, while others stayed south to fight for a new nation. The descendants of Scottish settlers in both countries began to rediscover their heritage in the 19th and 20th centuries through Clan societies and highland games. An inquiry into the early roots of North American families has revealed a number of immigrants bearing the name McConnaughey or a variant listed above: Daniel Robertson, who settled in Virginia in 1716; along with Francis, Isabella, James, John, and Donald; Alexander, Archibald, Charles, Daniel, Duncan, George, Henry, James, Jane, John, Robert, Thomas and William Robertston all arrived in Philadelphia between 1800 and 1870.