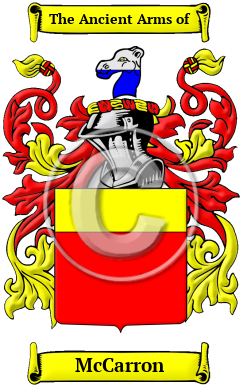 The original Gaelic form of McCarron was Mac Carrghamhna, which is derived from the word "gamhan," which means "calf," and "carr," which has many meanings.

Early Origins of the McCarron family

The surname McCarron was first found in County Monaghan (Irish: Muineachán) located in the Northern part of the Republic of Ireland in the province of Ulster, where they held a family seat from ancient times.

Early History of the McCarron family

This web page shows only a small excerpt of our McCarron research. Another 89 words (6 lines of text) covering the years 1605 and 1666 are included under the topic Early McCarron History in all our PDF Extended History products and printed products wherever possible.

In the Middle Ages many people were recorded under different spellings each time their name was written down. Research on the McCarron family name revealed numerous spelling variations, including MacCarron, MacCarroon, MacCarren and others.

Notable amongst the family name at this time was Redmond Caron (1605?-1666), Irish friar and author, born of a good family near Athlone, Westmeath. "He embraced the order of St. Francis in the convent...
Another 34 words (2 lines of text) are included under the topic Early McCarron Notables in all our PDF Extended History products and printed products wherever possible.

In the United States, the name McCarron is the 9,310th most popular surname with an estimated 2,487 people with that name. [1]

McCarron migration to the United States +

The 18th century saw the slow yet steady emigration of Irish families to British North America and the United States. Those early Irish settlers that left their homeland were typically moderately well off: they were enticed by the promise of a sizable plot of land. However, by the 1840s, this pattern of immigration was gone: immigrants to North America were seeking refuge from the starvation and disease that the Great Potato Famine of that decade brought. The great numbers of Irish that arrived to the United States and the soon to be Canada were instrumental in their quick development as powerful industrial nations. An examination of early immigration and passenger lists uncovered many early immigrants bearing the name McCarron:

McCarron Settlers in United States in the 18th Century

McCarron Settlers in United States in the 19th Century

McCarron Settlers in Canada in the 19th Century

McCarron Settlers in Australia in the 19th Century

McCarron Settlers in New Zealand in the 19th Century

Historic Events for the McCarron family +