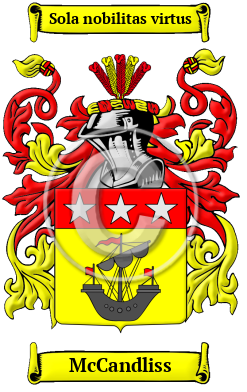 Early Origins of the McCandliss family

The surname McCandliss was first found in Galloway (Gaelic: Gall-ghaidhealaibh), an area of southwestern Scotland, now part of the Council Area of Dumfries and Galloway, that formerly consisted of the counties of Wigtown (West Galloway) and Kirkcudbright (East Galloway), where they held a family seat in Western Scotland. After the Norman Conquest of England many of Duke William's rebellious Barons moved north. The border became a convenient but turbulent no-man's land where the persecuted found haven. Many were given land by King Malcolm Canmore and later by King David of Scotland. Some Gallowegians were native Scots, some were Irish clans mostly from Ulster in the 13th century. The name was first recorded in Scotland about the 15th century in Wigtown. They may also have been McCanish sept of Atholl to the north.

Early History of the McCandliss family

This web page shows only a small excerpt of our McCandliss research. Another 122 words (9 lines of text) covering the years 1794, 1806, 1873, 1684 and are included under the topic Early McCandliss History in all our PDF Extended History products and printed products wherever possible.

More information is included under the topic Early McCandliss Notables in all our PDF Extended History products and printed products wherever possible.

Migration of the McCandliss family to Ireland

Some of the McCandliss family moved to Ireland, but this topic is not covered in this excerpt.
Another 51 words (4 lines of text) about their life in Ireland is included in all our PDF Extended History products and printed products wherever possible.

Migration of the McCandliss family

Some of the first settlers of this family name or some of its variants were: George McCandlish who held lands in what is now Milton in Pennsylvania, in 1775.