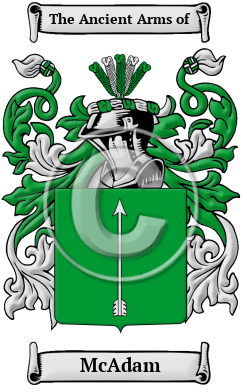 In ancient Scotland, the ancestors of the first people to use the name McAdam were part of a tribe known as the Strathclyde Britons. The name is derived from the given name Adam, which is itself derived from the Latin name Adamus which means earth.

The MacAdams "of Waterhead, co. Ayr, claim descent from the head of the Clan Macgregor; but the name was changed, early in the XVI. century, from Macgregor to Macadam, in consequence of political troubles." [1]

Another source agrees with the postulation: "The family are descended from Adam Macgregor, grandson of Gregor Macgregor, chief of the clan Gregor." [2]

However, our research has shown the family existed far before Adam Macgregror as we shall soon show. In fact, "The Macadams of Waterhead, Ayrshire, of whom John Loudon Macadam the famous road-builder was a member, claim to be descended from a Macgregor of the first half of the sixteenth century who fled to Ayrshire. Recently Mr. Roy Devereux, great-grandson of the roadbuilder, in a letter to the press says: 'During my researches for the biography of my ancestor which I am now writing I have found no evidence whatever in support of the tradition that the McAdams are descended from the McGregors.'" [3]

Early Origins of the McAdam family

The surname McAdam was first found in Annandale, where they held a family seat at Kynemund and at Waterhead in the Stewartry of Kirkudbright.

"Adam of Caithness (d. 1222), Scottish bishop, was probably a native of the south of Scotland. The tradition is that he was a foundling exposed at the church door. He first appears in 1207, when we find that he, already prior of the Cistercians at Melrose, became abbot. " [4]

The name is MacAdaim in Gaelic, denoting "son of Adam" and the first record was "Dolfinus mach Adam witnessed a charter by Ernaldus, bishop of St. Andrews, c. 1160-1162." [3] This is likely the same aforementioned "Adam of Caithness" mentioned above but the Latin form of the name was used for this entry.

Early History of the McAdam family

Spelling variations of this family name include: MacAdam, MacAdams, McAdam, McAdams, MacCaw and others.

Another 36 words (3 lines of text) are included under the topic Early McAdam Notables in all our PDF Extended History products and printed products wherever possible.

Migration of the McAdam family to Ireland

Some of the McAdam family moved to Ireland, but this topic is not covered in this excerpt.
Another 43 words (3 lines of text) about their life in Ireland is included in all our PDF Extended History products and printed products wherever possible.

McAdam migration to the United States +

McAdam Settlers in United States in the 17th Century

McAdam Settlers in United States in the 18th Century

McAdam Settlers in United States in the 19th Century

McAdam Settlers in Canada in the 19th Century

McAdam Settlers in Australia in the 19th Century

McAdam Settlers in New Zealand in the 19th Century

Historic Events for the McAdam family +

Suggested Readings for the name McAdam +