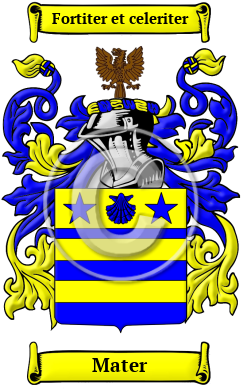 Early Origins of the Mater family

The surname Mater was first found in Kincardineshire (Gaelic: A' Mhaoirne), a former county on the northeast coast of the Grampian region of Scotland, and part of the Aberdeenshire Council Area since 1996, where they held a family seat from early times and their first records appeared on the early census rolls taken by the early Kings of Britain to determine the rate of taxation of their subjects.

Early History of the Mater family

Notable amongst the Clan at this time was Sir Richard Maddir; Richard Mather (1596-1669), a Puritan clergyman in colonial Boston, Massachusetts; and his son, Nathaniel Mather (1631-1697), and English-born Independent minister from Much Woolton, Lancashire; Increase Mather (1639-1723), a Puritan minister who was involved with the government of the Massachusetts Bay...
Another 50 words (4 lines of text) are included under the topic Early Mater Notables in all our PDF Extended History products and printed products wherever possible.

Migration of the Mater family to Ireland

Some of the Mater family moved to Ireland, but this topic is not covered in this excerpt.
Another 68 words (5 lines of text) about their life in Ireland is included in all our PDF Extended History products and printed products wherever possible.

Mater migration to the United States +

Mater Settlers in United States in the 19th Century