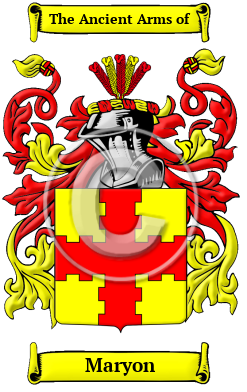 Early Origins of the Maryon family

The surname Maryon was first found in Hampshire where they held a family seat as Lords of the Manor. The Norman influence of English history diminished after the Battle of Hastings in 1066. The language of the courts was French for the next three centuries and the Norman ambience prevailed. The family name was first referenced in the 12th century when they held estates in that shire. They were one of the many noble Norman families King Henry recruited from Normandy during his reign. They were of Marrini or Marigny family of Calvados in Bayeux at Marigny, 4 kilometers from Port en Bessin. In 1166 Gwerri or Guerri Marigny held half a knights fee from Adam de Port, a Norman Baron, at Mapledurwell, 3 miles from Basingstoke. The family held a family seat at Winteringham in Lincolnshire in early times. "The estates were anciently held by the Marmions, one of whom, in the reign of Edward II., obtained a charter for a market here, now no longer held." [1]

Early History of the Maryon family

This web page shows only a small excerpt of our Maryon research. Another 103 words (7 lines of text) covering the years 1327, 1379, 1455 and 1487 are included under the topic Early Maryon History in all our PDF Extended History products and printed products wherever possible.

More information is included under the topic Early Maryon Notables in all our PDF Extended History products and printed products wherever possible.

Maryon migration to the United States +

Maryon Settlers in United States in the 18th Century

Maryon Settlers in United States in the 19th Century

Maryon Settlers in United States in the 20th Century