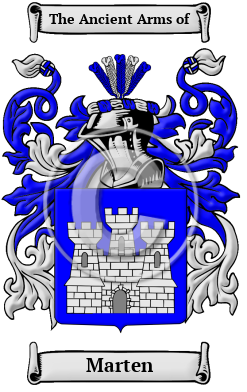 The French duchy of Gascogne was the home of the family who first used the name Marten. The surname was derived from the patron saint, Saint Martinus, a Bishop of Tours and Evangelist of la Gaule who was very popular in the Middle Ages.

Early Origins of the Marten family

The surname Marten was first found in Gascony (French: Gascogne), an area of southwest France bordering Spain, that was part of the "Province of Guyenne and Gascony" prior to the French Revolution, where the family has held a family seat from ancient times.

Early History of the Marten family

French surnames were subject to numerous spelling alterations depending on the region and time it was used. The early development of the French language relied heavily on borrowing elements and grammar from other languages. For example, Old French was infused with Germanic words and sounds when barbarian tribes invaded and settled in France after the fall of the Roman Empire. Middle French also borrowed heavily from the Italian language during the Renaissance. As a result of these linguistic and cultural influences, the name Marten is distinguished by a number of regional variations. The many spelling variations of the name include Martin, Martine, Lamartine, Martinat, Martinaud, Martinault, Martinot, Martineau, Martinet, Martiné, Martinon, Martinesque, Martet, Marthet, Marté, Martaud, Martault, Martot, Marti, Marty, Martinenche, Martiena, Martirena, Martens, Mertens, Saint-Martin and many more.

Notable amongst the family at this time was François Martin (1634-1706), the first Governor General of Pondicherry, Commissioner of French India (1681-1693), Governor-General of French India (1699-1706); Charles-Amador Martin, (1648-1711), Canadian clergyman, the second Canadian to be ordained a priest; Jean-Baptiste Martin, an officer and...
Another 44 words (3 lines of text) are included under the topic Early Marten Notables in all our PDF Extended History products and printed products wherever possible.

In the United States, the name Marten is the 16,437th most popular surname with an estimated 2,487 people with that name. [3]

Marten migration to the United States +

French settlers came early to North American, following in the wake of the explorers, and creating New France. Quebec City, founded in 1608 by Samuel de Champlain is said to have been the first American site founded as a permanent settlement, rather than as just a commercial outpost. But emigration was slow, in 1643, 109 years after the first landings by Cartier, there were only about 300 French people in Quebec, and by 1663, when the region was officially made The Royal Colony of New France, by Louis XIV, there still only around 500 settlers. Over 2,000 would arrive during the next decade. Early marriage was desperately encouraged amongst the immigrants. Youths of 18 took fourteen-year-old girls for their wives. The fur trade was developed and attracted immigrants, both noble and commoner from France. By 1675, there were around 7000 French in the colony, and by that same year the Acadian presence in Nova Scotia, New Brunswick and Prince Edward Island had reached 500. In 1755, 10,000 French Acadians refused to take an oath of allegiance to England and were deported to Louisiana. Despite the loss of the Colony to England, the French people flourished in Lower Canada. Among settlers to North America of the Marten surname were

Marten Settlers in United States in the 17th Century

Marten Settlers in United States in the 18th Century

Marten Settlers in United States in the 19th Century

Marten Settlers in United States in the 20th Century

Marten Settlers in Australia in the 19th Century

Marten Settlers in New Zealand in the 19th Century