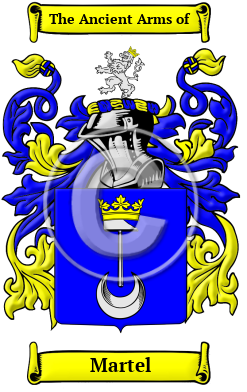 The name Martel first came from the French word "martelage" which means "hammering" and later the word "martel" was used for a "weapon hammer". [1]

Early Origins of the Martel family

The surname Martel was first found in Gascony (French: Gascogne), an area of southwest France bordering Spain, that was part of the "Province of Guyenne and Gascony" prior to the French Revolution, where the family has held a family seat since ancient times. Charles Martel (c. 688-741) was a Frankish ruler best known for his victory at the Battle of Tours in 732, which halted the European invasion by the Moors. He was given the nickname Martel, "the Hammer", for his approach to battle. At this early date this was not a hereditary surname. He is also said to be the grandfather of Charlemagne.

By the 15th century the family was well established in Gascogne and several members held distinctive positions in society and were rewarded by their peers with lands, titles, and letters patent confirming their nobility.

Throughout the centuries the family prospered and expanded to various regions where members of the family adapted to the cultural and linguistic changes in these new areas and they became prominent citizens in their respective communities. The name Martel was also seen in Normandy with many distinguished families, cited in 1066 and 1133. [2]

Honore Martel, son of Jean and Marie (née Duchesne), travelled to Canada from Paris, France around 1667. He married Marguerite La Mirault, daughter of François and Jeanne (née Clause), at the church of Quebec on 26th November 1668. They settled together at Dombour, Neuville, Quebec. [3]

Early History of the Martel family

Notable amongst the family at this time was Charles Martel d'Anjou (1271-1295), also known as Charles I Martel; he was the son of king Charles II of Naples and Maria of Hungary...
Another 31 words (2 lines of text) are included under the topic Early Martel Notables in all our PDF Extended History products and printed products wherever possible.

Martel migration to the United States +

Martel Settlers in United States in the 18th Century

Martel Settlers in United States in the 19th Century

Martel Settlers in Canada in the 17th Century

Martel Settlers in Canada in the 18th Century

Martel Settlers in New Zealand in the 19th Century