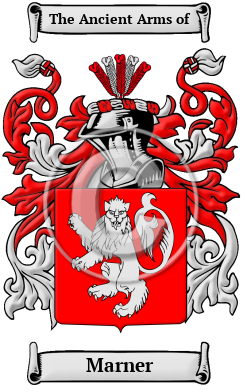 Early Origins of the Marner family

The surname Marner was first found in Essex where they held a family seat. They were descended from the great and noble Marinni (Mareigni or Mairinni) family of Calvados, in the arrondisement of Bayeux in Normandy where Gwerri de Marinni in 1166 held half a knight's fee at Adam de Port of Mapledurwell. [1]

Early History of the Marner family

Another 47 words (3 lines of text) are included under the topic Early Marner Notables in all our PDF Extended History products and printed products wherever possible.

Marner migration to the United States +

Marner Settlers in United States in the 17th Century

Marner Settlers in United States in the 18th Century

Marner Settlers in United States in the 19th Century