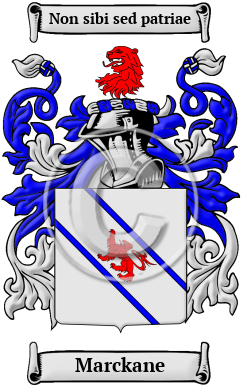 The name Marckane has a long Anglo-Saxon heritage. The name comes from when a family lived in Marsham in Norfolk, or in the place called Mersham in Kent. [1] The surname Marckane belongs to the large category of Anglo-Saxon habitation names, which are derived from pre-existing names for towns, villages, parishes, or farmsteads.

Early Origins of the Marckane family

The surname Marckane was first found in Norfolk at Marsham, a parish, in the union of Aylsham, hundred of South Erpingham. [2] The parish dates back to the Domesday Book of 1086 where it was first listed as Marsam. [3] Literally the place name means "homestead or village by a marsh," from the Old English words "mersc" + "ham." [4] Mersham is a parish, in the union of East Ashford, hundred of Chart and Longbridge, lathe of Shepway. [2] The first record of the name was Leofstan aet Merseham c. 1060 who was listed in the reference Old English Bynames. Benjamin de Merseham was listed in the Feet of Fines of Kent in 1236 and John de Marsham was listed in the Coroner Rolls of London in 1336. [1] Some of the family were found at Stratton-Strawless in Norfolk since very early times. "The Hall, a large mansion of white brick, in a well-wooded park, is the seat of R. Marsham, Esq., in whose family it has remained since the time of Edward the First." [2]

Early History of the Marckane family

Spelling variations in names were a common occurrence before English spelling was standardized a few hundred years ago. In the Middle Ages, even the literate spelled their names differently as the English language incorporated elements of French, Latin, and other European languages. Many variations of the name Marckane have been found, including Marsham, Marshan, Marshom, Marshon, Marshman and others.

Distinguished members of the family include Sir John Marsham, 1st Baronet of Cuckston (1602-1685), an English antiquary known as a writer on chronology; Sir John Marsham, 2nd Baronet (1637-1692); Sir John Marsham, 3rd Baronet (1679-1696); Sir Robert Marsham...
Another 38 words (3 lines of text) are included under the topic Early Marckane Notables in all our PDF Extended History products and printed products wherever possible.

Migration of the Marckane family

Families began migrating abroad in enormous numbers because of the political and religious discontent in England. Often faced with persecution and starvation in England, the possibilities of the New World attracted many English people. Although the ocean trips took many lives, those who did get to North America were instrumental in building the necessary groundwork for what would become for new powerful nations. Some of the first immigrants to cross the Atlantic and come to North America bore the name Marckane, or a variant listed above: Thomas Marsham, who settled in Virginia in 1654; Charles Marshom, who settled in Boston in 1768; James Marshman, a British convict, sent to Maryland in 1772.