The ancient roots of the Marchen family name are in the Anglo-Saxon culture. The name Marchen comes from when the family lived in Marsham in Norfolk, or in the place called Mersham in Kent. [1] The surname Marchen belongs to the large category of Anglo-Saxon habitation names, which are derived from pre-existing names for towns, villages, parishes, or farmsteads.

Early Origins of the Marchen family

The surname Marchen was first found in Norfolk at Marsham, a parish, in the union of Aylsham, hundred of South Erpingham. [2] The parish dates back to the Domesday Book of 1086 where it was first listed as Marsam. [3] Literally the place name means "homestead or village by a marsh," from the Old English words "mersc" + "ham." [4] Mersham is a parish, in the union of East Ashford, hundred of Chart and Longbridge, lathe of Shepway. [2] The first record of the name was Leofstan aet Merseham c. 1060 who was listed in the reference Old English Bynames. Benjamin de Merseham was listed in the Feet of Fines of Kent in 1236 and John de Marsham was listed in the Coroner Rolls of London in 1336. [1] Some of the family were found at Stratton-Strawless in Norfolk since very early times. "The Hall, a large mansion of white brick, in a well-wooded park, is the seat of R. Marsham, Esq., in whose family it has remained since the time of Edward the First." [2]

Early History of the Marchen family

One relatively recent invention that did much to standardize English spelling was the printing press. However, before its invention even the most literate people recorded their names according to sound rather than spelling. The spelling variations under which the name Marchen has appeared include Marsham, Marshan, Marshom, Marshon, Marshman and others.

Migration of the Marchen family

At this time, the shores of the New World beckoned many English families that felt that the social climate in England was oppressive and lacked opportunity for change. Thousands left England at great expense in ships that were overcrowded and full of disease. A great portion of these settlers never survived the journey and even a greater number arrived sick, starving, and without a penny. The survivors, however, were often greeted with greater opportunity than they could have experienced back home. These English settlers made significant contributions to those colonies that would eventually become the United States and Canada. An examination of early immigration records and passenger ship lists revealed that people bearing the name Marchen arrived in North America very early: Thomas Marsham, who settled in Virginia in 1654; Charles Marshom, who settled in Boston in 1768; James Marshman, a British convict, sent to Maryland in 1772. 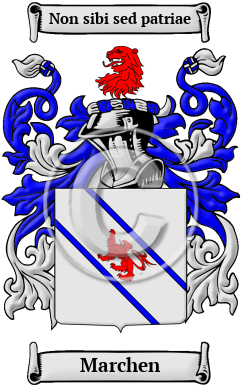