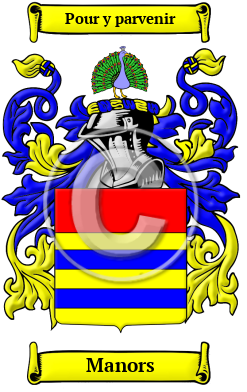 Manors is a name that first reached England following the Norman Conquest of 1066. The Manors family lived in Mesnieres a small village in France near Roen and was "granted probably temp. Rollo (c. 846-c.932) to Mainer, a Viking ancestor. It was held as half a knight's fee temp. Philip Augustus by the Abbey of Lyre. The family of Mesnieres long continued in Normandy, Ralph and Roger de Mesieres being mentioned 1198 and William de Mesieres in 1232, whose descendants continued to be of consequence till c. 1400 when the male line ceased." [1] Another source confirms the probably Norman ancestry: "From Menoir, and that from the Latin Manere, to stay or to abide. Lands granted to some military man or Baron by the king, a custom brought in by the Normans." [2]

Early Origins of the Manors family

The surname Manors was first found in Northumberland where Sir Robert Manners was one of the first on record, when he held land in Northumberland in 1165, and it is suggested that the village Mannor near Lanchester in neighboring Durham was named from the family. "According to Camden and other antiquaries, this noble family had their denomination from the village of Mannor, near Lanchester, co. Durham. They were certainly influential in the northern counties, and Collins traces the name to a William de Manner, who flourished temp. William Rufus. The pedigree is deduced by him from Sir Robert de Manners, lord of Etal in Northumberland, several generations anterior to the reign of Henry III." [3] The first Sir Robert de Manners born (c. 1038) was probably born in Ethdale, Northumberland. He is the progenitor of a long list of sons with the same name.

Early History of the Manors family

It is only in the last few hundred years that the English language has been standardized. For that reason, Anglo-Norman surnames like Manors are characterized by many spelling variations. Scribes and monks in the Middle Ages spelled names they sounded, so it is common to find several variations that refer to a single person. As the English language changed and incorporated elements of other European languages such as Norman French and Latin, even literate people regularly changed the spelling of their names. The variations of the name Manors include Manners, Maners, Manner and others.

Outstanding amongst the family at this time was Thomas Manners (c.1488-1543), son of the 12th Baron de Ros of Hamlake, who was created Earl of Rutland in 1525 - this was the second creation of this title, which has remained with the Manners, ever since; John Manners (c.1559-1588), the 4th Earl of Rutland and...
Another 54 words (4 lines of text) are included under the topic Early Manors Notables in all our PDF Extended History products and printed products wherever possible.

Migration of the Manors family

Faced with the chaos present in England at that time, many English families looked towards the open frontiers of the New World with its opportunities to escape oppression and starvation. People migrated to North America, as well as Australia and Ireland in droves, paying exorbitant rates for passages in cramped, unsafe ships. Many of the settlers did not make the long passage alive, but those who did see the shores of North America were welcomed with great opportunity. Many of the families that came from England went on to make essential contributions to the emerging nations of Canada and the United States. Some of the first immigrants to cross the Atlantic and come to North America carried the name Manors, or a variant listed above: Joseph Manners who settled in Virginia in 1635; Patrick Manners settled in Boston in 1847; Frederick Manners settled in Philadelphia in 1864.