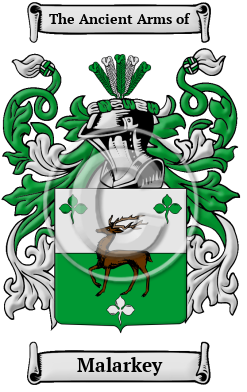 The Irish Malarkey surname comes from the Gaelic "ó Maoilearca," a patronymic meaning a descendant of Maoilearca, a follower of St. Earc.

Early Origins of the Malarkey family

The surname Malarkey was first found in Tirconnell (Irish: Tír Chonaill) present day Donegal, located in Northwestn Ireland in the province of Ulster, where they held a family seat as a branch of the O'Connell's. Irish history, after the Norman Conquest of England, was strongly influenced by the invasion of Strongbow in 1172, almost equal to the enormous Irish cultural impact on England Scotland, Wales and the whole of Europe before the Norman Conquest from the 1st to 7th centuries. Many Irish clanns, sept names were intermixed and family groupings became almost indistinguishable. This family name was found later in Connacht.

Early History of the Malarkey family

This web page shows only a small excerpt of our Malarkey research. Another 83 words (6 lines of text) covering the year 1651 is included under the topic Early Malarkey History in all our PDF Extended History products and printed products wherever possible.

Spelling variations of this family name include: Mullarkey, Mullarky, Mallarky, Malarchy, Malarkey, Mularkey and many more.

More information is included under the topic Early Malarkey Notables in all our PDF Extended History products and printed products wherever possible.

Malarkey migration to the United States +

Malarkey Settlers in United States in the 19th Century

Malarkey Settlers in United States in the 20th Century

Malarkey Settlers in Canada in the 19th Century