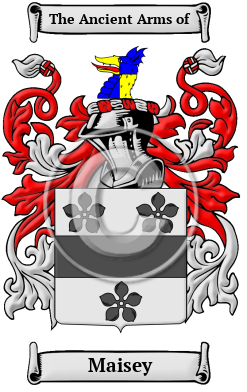 The illustrious surname Maisey is classified as a habitation surname, which was originally derived from a place-name, and is one form of surname belonging to a broader group called hereditary surnames. Habitation names were derived from pre-existing names for towns, villages, parishes, or farmsteads. Topographic names, form the other broad category of surnames that was given to a person who resided near a physical feature such as a hill, stream, church, or type of tree.

Other local names are derived from the names of houses, manors, estates, regions, and entire counties. As a general rule, the greater the distance between an individual and their homeland, the larger the territory they were named after. For example, a person who only moved to another parish would be known by the name of their original village, while people who migrated to a different country were often known by the name of a region or country from which they came. Maisey is a place-name from at Meisi in Calvados, Normandy. However, the family is traditionally considered Breton, not Norman. It seems likely that the family was a Breton family who happened to live a bit further west than the rest of the Bretons. This is because of the unique history of the peninsula of Brittany, on the northwest coast of France, and of the people who lived there. Formerly known as Armorica, a possession of the Roman Empire, this land consists of a plateau with a deeply indented coast and is broken by hills in the west. However, the region was renamed Britannia Minor by the Romans, following the emigration of six thousand Britons across the English Channel, an event which took place at the behest of the Roman Commander in Britain.

Early Origins of the Maisey family

The surname Maisey was first found in Gloucestershire where they held a family seat as Lords of the Manors of Hampton Meysey and Marston Meysey. Family tradition states that the Meysey family was from Brittany and that they accompanied William the Conqueror in his conquest of England at the Battle of Hastings in 1066 A.D. However, there is a Meisi in Calvados in Normandy, and this may have been a branch of the same family name. Godfrey de Meysey held his lands from the Bishop Theulfus. Soon after, about 1110, they removed to Worcesterhsire and the name appears frequently in the Red Book of the Bishopric of Worcester.

Early History of the Maisey family

This web page shows only a small excerpt of our Maisey research. Another 105 words (8 lines of text) covering the year 1764 is included under the topic Early Maisey History in all our PDF Extended History products and printed products wherever possible.

Since the Old and Middle English languages lacked definite spelling rules, Breton surnames have many spelling variations. Latin and French, which were the official court languages, were also influential on the spelling of surnames. The spelling of surnames was rarely consistent in medieval times, and scribes and church officials recorded names as they sounded rather than adhering to any specific spelling rules. Therefore, it was common to find the same individual referred to with different spellings of their surname in the ancient chronicles. Moreover, a large number of foreign names were brought into England after the Norman Conquest, which accelerated and accentuated the alterations to the spelling of various surnames. The name has been spelled Meysey, Meysy, Mysey, Maisie, Maysey, Maisey and others.

More information is included under the topic Early Maisey Notables in all our PDF Extended History products and printed products wherever possible.

Maisey Settlers in Australia in the 19th Century