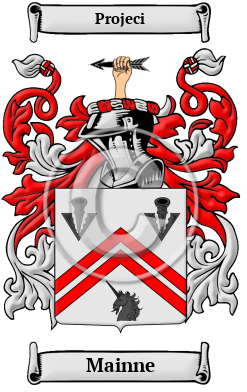 Mainne is a name of ancient Norman origin. It arrived in England with the Norman Conquest of 1066. The Mainne family lived in Maien, or Mayene, from Mayenne in Maine, Normandy and was a powerful baronial house, with Walter de Maynne listed in 976. [1]

Early Origins of the Mainne family

The surname Mainne was first found in Devon at King's Nympton, a parish, in the union of South Molton, hundred of Witheridge. The manor, which was parcel of the ancient demesne of the crown, was granted by King John to Joel de Mayne, by whose rebellion it was again vested in the crown: it was given by Henry III. to Roger le Zouch. [2]

"Judael of Mayenne had a vast barony in Devon in 1086, and his family long continued there. In 1165 Walter Fitz Juel de Mayenne (de Meduana) held a barony of twenty-one knight's fees in Kent." [3]

Judael appears in the Domesday Book as Judhel de Totenais, so named for the barony of Totness. He is probably the grandfather of Juhel de Meduana who witnesses one of the Empress Maud's charters to Geoffrey de Mandeville. Nicholas de Meduana, of Dorset and Somerset are listed in the Great Roll of the Pipe (Pipe Rolls) 1 Richard I. [1]

Early History of the Mainne family

Endless spelling variations are a prevailing characteristic of Norman surnames. Old and Middle English lacked any definite spelling rules, and the introduction of Norman French added an unfamiliar ingredient to the English linguistic stew. French and Latin, the languages of the court, also influenced spellings. Finally, Medieval scribes generally spelled words according to how they sounded, so one person was often referred to by different spellings in different documents. The name has been spelled Main, Maine, Mayne and others.

Outstanding amongst the family at this time was Saint Cuthbert Mayne (1544-1577), an English Roman Catholic priest and martyr of the Reformation and Counter-Reformation; Simon Mayne (1612-1661), English Member of Parliament from Dinton Hall in Buckinghamshire, one of the regicides of King Charles I; and Lieutenant-General Edmund Maine (1633-1711), an English soldier and politician, Governor of Berwick-upon-Tweed (1702-1711) and Member of Parliament for Morpeth (1705-1708.) Alexander DelaMaine (fl. 1654-1683), the Muggletonian...
Another 69 words (5 lines of text) are included under the topic Early Mainne Notables in all our PDF Extended History products and printed products wherever possible.

Migration of the Mainne family to Ireland

Some of the Mainne family moved to Ireland, but this topic is not covered in this excerpt.
Another 56 words (4 lines of text) about their life in Ireland is included in all our PDF Extended History products and printed products wherever possible.

Migration of the Mainne family

To escape the political and religious persecution within England at the time, many English families left for the various British colonies abroad. The voyage was extremely difficult, though, and the cramped, dank ships caused many to arrive in the New World diseased and starving. But for those who made it, the trip was most often worth it. Many of the families who arrived went on to make valuable contributions to the emerging nations of Canada and the United States. An inquiry into the early roots of North American families reveals a number of immigrants bearing the name Mainne or a variant listed above: John Maine of York, England, who came to America in 1629 and settled at York, Maine; Gregory Maine, who came to Virginia in 1650; George Maine, who settled in Georgia in 1735.

Motto: Projeci
Motto Translation: I have thrown away.