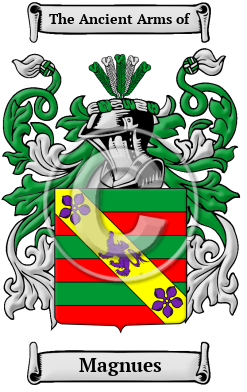 Early Origins of the Magnues family

The surname Magnues was first found in Shetland where they held a family seat in their territories in the Orkneys. The Viking influence of northern Scotland developed as a stepping stone to Iceland from Scandinavia. Many Viking expeditions were started from the Orkneys and the northern tip. Rollo, first Duke of Normandy, started his conquest of that part of France as an expeditionary from here. Hugo Magnus was found at 1114. [1] Later the name was found in Cortance, Aberdeen in the 17th century.

Early History of the Magnues family

This web page shows only a small excerpt of our Magnues research. Another 137 words (10 lines of text) covering the years 1047, 1510, 1600 and 1420 are included under the topic Early Magnues History in all our PDF Extended History products and printed products wherever possible.

More information is included under the topic Early Magnues Notables in all our PDF Extended History products and printed products wherever possible.

Migration of the Magnues family