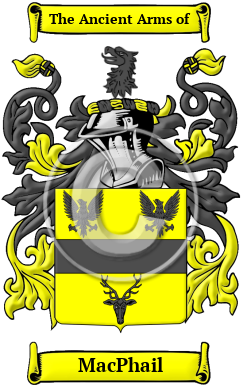 The history of the ancestors of the MacPhail family begins among the Pictish clans ancient Scotland. The name MacPhail comes from the personal name Paul. The Gaelic form of the name is Mac Phàil. [1]

Another source notes the name is from "Mac Phail, ‘Paul's Son'. Phail is Anglicised from Maelfabhaill. ‘Maelfabhaill, son of Muircheartach, slain by the Norsemen'. " [2]

Early Origins of the MacPhail family

The surname MacPhail was first found in Inverness, where one of the first records was of Gillemore M'Phale who was one of an inquest at Inverness in 1414. [3]

From this earliest record, spellings were frequently changed. "Donald M'Pawle witnessed an indenture between Doncan Makyntosche and Huchone the Rois, Baron of Kylraok, 1490, and Donald Makfaill and Gylleis Makfaill were witnesses to a contract of friendship between Dunbar of Westfield and the Clanchattan, 1492. Finlay MacChaell, bailie of Rothesay, 1501, appears in 1503 as Macfaill, and again in 1506 as Makcaill, under which name he received a grant of a third of the lands of Dunallirde in Bute. The lands of Dulatyr in the lordship of Petty were let to Gilleis McFale in 1504. Sir John Mcfaell, a Pope's knight, who witnessed a bond of manrent in 1533, is possibly D John M'Fale who witnessed a charter relating to the church of Lindichty, 1535, and in 1538 appears as rector of the church." [3]

Early History of the MacPhail family

Prior to the invention of the printing press in the last hundred years, documents were basically unique. Names were written according to sound, and often appeared differently each time they were recorded. Spelling variations of the name MacPhail include MacPhail, MacPhial, MacPhiel, MacFail, MacFall, MacFaul, MacVail, MacPhale, MacPail, MacPhaul, MacFale, Phail, Fayle and many more.

Notable amongst the Clan at this time was James MacPhail (fl. 1786-1805), gardener, the son of a highland peasant, born in Aberdeenshire in 1754. In his seventeenth year he obtained employment as a farm labourer. 'I ate and drank,' he says, 'at the same table as my master and mistress, for I was the only servant or labourer they kept' (Hints and Observations on the Improvement of...
Another 66 words (5 lines of text) are included under the topic Early MacPhail Notables in all our PDF Extended History products and printed products wherever possible.

Migration of the MacPhail family to Ireland

Some of the MacPhail family moved to Ireland, but this topic is not covered in this excerpt.
Another 77 words (6 lines of text) about their life in Ireland is included in all our PDF Extended History products and printed products wherever possible.

MacPhail migration to the United States +

The freedom of the North American colonies was enticing, and many Scots left to make the great crossing. It was a long and hard journey, but its reward was a place where there was more land than people and tolerance was far easier to come by. Many of these people came together to fight for a new nation in the American War of Independence, while others remained loyal to the old order as United Empire Loyalists. The ancestors of Scots in North America have recovered much of this heritage in the 20th century through Clan societies and other such organizations. A search of immigration and passenger lists revealed many important and early immigrants to North America bearing the name of MacPhail:

MacPhail Settlers in United States in the 19th Century

MacPhail Settlers in United States in the 20th Century

MacPhail Settlers in Canada in the 20th Century