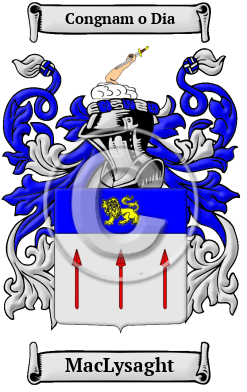 Surnames of Irish origin have experienced many changes in their spellings and forms. Before being translated into English, MacLysaght appeared in Gaelic as Mac Giolla Iasachta, meaning "son of the servant of the foreigner."

Early Origins of the MacLysaght family

The surname MacLysaght was first found in County Clare (Irish: An Clár) located on the west coast of Ireland in the province of Munster, where they held a family seat from ancient times.

Early History of the MacLysaght family

This web page shows only a small excerpt of our MacLysaght research. Another 88 words (6 lines of text) covering the year 1763 is included under the topic Early MacLysaght History in all our PDF Extended History products and printed products wherever possible.

Spelling variations of this family name include: M'Lysaght, McLysaght, MacLysaght, MacGillysaghty, MacGilliesaghta and many more.

Notable amongst the family name at this time was William MacLysaght who distinguished himself as an Irish Parliamentarian; and Edward Lysaght (b. 1763), a Irish poetical writer from County...
Another 28 words (2 lines of text) are included under the topic Early MacLysaght Notables in all our PDF Extended History products and printed products wherever possible.

Migration of the MacLysaght family