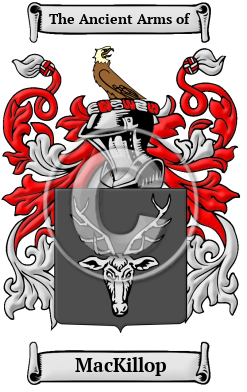 In the mountains of Scotland's west coast and on the Hebrides islands, the ancestors of the MacKillop family were born. Their name comes from the personal name Philip, which is originally derived from the Greek personal name Philippos, which means horse-lover. The Gaelic form of the surname is Mac Fhilib, meaning son of Philip. The f is aspirated in the genitive case, causing it to disappear. [1]

Early Origins of the MacKillop family

The surname MacKillop was first found in Argyllshire (Gaelic erra Ghaidheal), the region of western Scotland corresponding roughly with the ancient Kingdom of Dál Riata, in the Strathclyde region of Scotland, now part of the Council Area of Argyll and Bute, where they held a family seat at Brae Lochaber from ancient times being descended from an ancient chieftain of the MacDonnells of Keppoch who were, in turn, descended from the Lords of the Isles. It has been suggested that the MacKillops or MacGilps may be the sons of Ilpin or Gilpin, in Iam Lom's "Soiidh do'n Ghreumach."

"Some of this name are said to have been standard-bearers to the Campbells of Dunstaffnage, others are included as septs of Macdonald of Glencoe and of Macdonells of Keppoch, and Mackillop also occurs as a surname in Arran. Finlaius Macpilibh, priest of the diocese of Argyll, is in record in 1433, and in 1437 John, son of Fynlaius Prioris Macphilib, appears as perpetual vicar of Kilcalmonell." [1]

The MacPhillip or MacPhillips variant reappears later in history as the first record of the branch was found as "Philip, a son of Fingonius, prior of Iona, who was commemorated on a tombstone in Cladh Reg, Kirkapoll, Tiree, 1495. " [1]

Early History of the MacKillop family

This web page shows only a small excerpt of our MacKillop research. Another 124 words (9 lines of text) covering the years 1433, 1437, 1526, 1532, 1547 and 1659 are included under the topic Early MacKillop History in all our PDF Extended History products and printed products wherever possible.

More information is included under the topic Early MacKillop Notables in all our PDF Extended History products and printed products wherever possible.

Migration of the MacKillop family to Ireland

Some of the MacKillop family moved to Ireland, but this topic is not covered in this excerpt.
Another 145 words (10 lines of text) about their life in Ireland is included in all our PDF Extended History products and printed products wherever possible.

MacKillop migration to the United States +

The descendants of the Dalriadan families who made the great crossing of the Atlantic still dot communities along the east coast of the United States and Canada. In the American War of Independence, many of the settlers traveled north to Canada as United Empire Loyalists. Clan societies and highland games have allowed Canadian and American families of Scottish descent to recover much of their lost heritage. Investigation of the origins of family names on the North American continent has revealed that early immigrants bearing the name MacKillop or a variant listed above include:

MacKillop Settlers in United States in the 19th Century

MacKillop Settlers in United States in the 20th Century