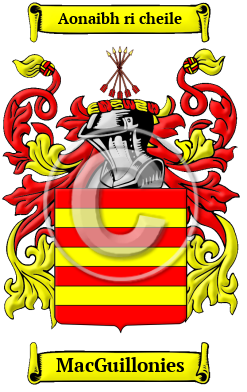 The story of the MacGuillonies family is rich with Scottish history. It begins in the ancient kingdom of Dalriada where MacGuillonies evolved as a name for some who lived in either Cameron near Edinburgh, Cameron in Lennox, or Cameron in Fife. Thus, the name Camerons of the Lowlands is of territorial origin, from one of the three places so called. The Highland Clan name Cameron may come from the Lowland name, but it is also derived from the Gaelic word cam-shron, which means wry or hook-nosed.

Early Origins of the MacGuillonies family

The surname MacGuillonies was first found in Angus (Gaelic: Aonghas), part of the Tayside region of northeastern Scotland, and present day Council Area of Angus, formerly known as Forfar or Forfarshire, among the hills which surrounded Lochy, Arkaig, and Ely.

Early History of the MacGuillonies family

Historical recordings of the name MacGuillonies include many spelling variations. They include They are the result of repeated translations of the name from Gaelic to English and inconsistencies in spelling rules. Cameron, MacGuillonies, MacSorlies and many more.

Notable amongst the Clan from early times was John Cameron (d. 1446), Bishop of Glasgow and chancellor of Scotland, said to have belonged to a family of Edinburgh burghers, and to have drawn his name more remotely from the Camerons of Craigmillar, and not, as was formerly asserted, from the Camerons of Lochiel. In 1422 he was appointed official of Lothian by Archbishop Wardlaw of St. Andrews (Crawfurd). Two years later he was acting in the capacity of secretary to the Earl of Wigtown (December 1423), who gave him the rectory of Cambuslang in Lanarkshire. [1] John Cameron (1579?-1625), was a Scottish...
Another 143 words (10 lines of text) are included under the topic Early MacGuillonies Notables in all our PDF Extended History products and printed products wherever possible.

Migration of the MacGuillonies family to Ireland

Some of the MacGuillonies family moved to Ireland, but this topic is not covered in this excerpt.
Another 59 words (4 lines of text) about their life in Ireland is included in all our PDF Extended History products and printed products wherever possible.

Migration of the MacGuillonies family

Scottish settlers arrived in many of the communities that became the backbones of the United States and Canada. Many stayed, but some headed west for the endless open country of the prairies. In the American War of Independence, many Scots who remained loyal to England re-settled in Canada as United Empire Loyalists. Scots across North America were able to recover much of their lost heritage in the 20th century as Clan societies and highland games sprang up across North America. Early immigration and passenger lists have documented some of the first MacGuilloniess to arrive on North American shores: the group who arrived on the ships, the "Sarah" and the "Dove" in Upper Canada in 1801; their holds filled with 700 Camerons and Frasers from the Lochaber country. The Camerons also settled in the U.S.A. in Carolina, Pennsylvania, Massachusetts, St. Christopher, Virginia, New York, Georgia, and California, in the 18th and 19th centuries. In Newfoundland, Alexander Cameron settled in St. John's in 1744.