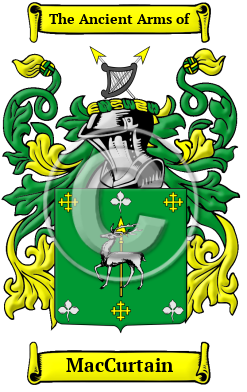 Irish surnames have been much altered from their original forms. Before being translated into English, MacCurtain appeared as "Mac Cuirtin," derived from the personal name "Cruitin," which means "hunchbacked." As this name is descriptive in origin, it is considered to be a nickname surname. Like the majority of early Irish hereditary surnames, nickname surnames were formed by adding either the prefix "Mc," meaning "son of," or "O," meaning "grandson of," to the root of the name.

Early Origins of the MacCurtain family

The surname MacCurtain was first found in County Clare (Irish: An Clár) located on the west coast of Ireland in the province of Munster, where they were an ancient Thomond sept whose family seat was at Ennistymon. They held a family seat as Chiefs of the Clann Cruitin. Their territories were in the barony of Corcomroe, County Clare, where they and the MacBrodys were hereditary ollaves (master-poets) and as such sat next to the king at the table and was privileged, as none else but the queen was, to wear six different colors in his clothes.

Early History of the MacCurtain family

This web page shows only a small excerpt of our MacCurtain research. Another 117 words (8 lines of text) covering the years 1680, 1755, 1793 and 1405 are included under the topic Early MacCurtain History in all our PDF Extended History products and printed products wherever possible.

Another 37 words (3 lines of text) are included under the topic Early MacCurtain Notables in all our PDF Extended History products and printed products wherever possible.

Migration of the MacCurtain family