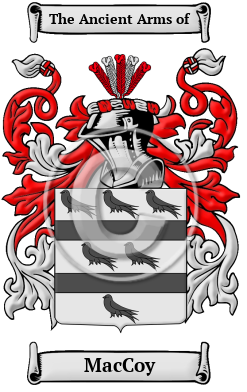 Early Origins of the MacCoy family

The surname MacCoy was first found in County Cork (Irish: Corcaigh) the ancient Kingdom of Deis Muin (Desmond), located on the southwest coast of Ireland in the province of Munster, where they trace their origins through Amhailgadh, brother of Flaitheartach on the Maguire pedigree. He was in turn ancestor of MacAodh. [1]

This line was native Irish, not to be confused with the group who descend from Mary MacCoy, wife of Duncan Campbell, of Inverary, Scotland who settled in Ulster, part of the Plantation of Ireland. They held lands in Londonderry.

Early History of the MacCoy family

This web page shows only a small excerpt of our MacCoy research. Another 69 words (5 lines of text) covering the years 1839, 1872, 1832, 1899, 1715 and 1774 are included under the topic Early MacCoy History in all our PDF Extended History products and printed products wherever possible.

Spelling variations of this family name include: MacCoy, MacCooey and others.

Another 38 words (3 lines of text) are included under the topic Early MacCoy Notables in all our PDF Extended History products and printed products wherever possible.

MacCoy migration to the United States +

MacCoy Settlers in United States in the 18th Century

MacCoy Settlers in United States in the 19th Century

MacCoy Settlers in Australia in the 19th Century