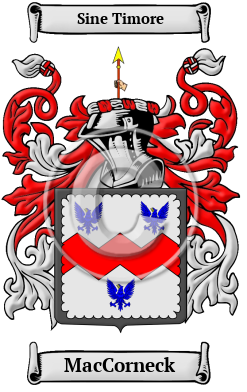 While many Irish names are familiar, their past incarnations are often shrouded in mystery, reflecting the ancient Gaelic heritage of their bearers. The original Gaelic form of the name MacCorneck is Mac Cormaic, derived from the forename Cormac.

Early Origins of the MacCorneck family

The surname MacCorneck was first found in Munster. The Cormacks of Munster were of great antiquity and descended directly from Nathi, brother of Felim who was King of Munster about the year 560 A.D. Cormac, son of Cabhsan, was the first chieftain to be called Cormack, and, of course, MacCormack came later as a direct descendent, Mac or Mc signifying the 'son of'.

Early History of the MacCorneck family

This web page shows only a small excerpt of our MacCorneck research. Another 76 words (5 lines of text) covering the years 1000, 1700, 1782 and 1720 are included under the topic Early MacCorneck History in all our PDF Extended History products and printed products wherever possible.

Irish names recorded during the Middle Ages are characterized by many spelling variations. This preponderance of variations for common names can be explained by the fact that the scribes and church officials that kept records during that period individually decided how to capture one's name. These recorders primarily based their decisions on how the name was pronounced or what it meant. Research into the name MacCorneck revealed many variations, including Cormack, MacCormack, McCormack, McCormick, MacCormick, Cormac, Cormick, Cormyck, Kormack, Kormick, Cormach, Cormich, Cormiche and many more.

Notable amongst the family name at this time was Anne McCormac (c. 1700-1782), birth name of Anne Bonny, born in Cork, the infamous Irish woman who became a famous pirate, operating in the Caribbean. After her capture in 1720, she and he female friend Read both "pleaded...
Another 46 words (3 lines of text) are included under the topic Early MacCorneck Notables in all our PDF Extended History products and printed products wherever possible.

Migration of the MacCorneck family

Under the rule of England, land ownership in Ireland changed dramatically, and many native Irish families found themselves renting out land to farm from absentee owners. This was one of the prime reasons that immigration to North America began in the late 18th century: Irish farmers dreamed of owning their own parcel of land to work for themselves. At this point, the immigrants were at least of modest means for the passage across the Atlantic was often quite dear. In the 1840s the Great Potato Famine created an exodus of people of quite different means. These people were most often destitute: they either sold anything they had to gain a passage or they were sponsored by philanthropic societies. Many of these immigrants were sick from disease and starvation: as a result many did not survive the long transatlantic journey. Although those settlers that did survive were often despised and discriminated against by people already established in these nations, they were critical to rapid development of the powerful industrial nations of the United States and the country that would later become known as Canada. An examination of immigration and passenger lists shows many persons bearing the name of MacCorneck or one of its variants: Daniell Cormack who settled in Virginia in 1643; Christopher Cormack settled in Annapolis Maryland in 1731; Patrick Cormack settled in New York State in 1804.