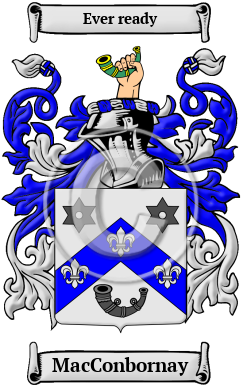 The ancient Scottish name MacConbornay was first used by the Strathclyde-Briton people of the Scottish/English Borderlands. The original bearer of the name lived in the county of Cumberland. On the onset, it is best first to establish that the family name Burns is in fact a Clan rather than a Sept of the Campbell Clan. A Roll of the Clans and Chiefs in 1597 shows the Burns Clan as having territories in the eastern Border marches of Scotland in East Teviotdale.

They were described as an unruly Clan. However, to relate the origins of this great Clan, we must go back to the year 1329, when their territories were located in the parish of Glenbervie. They had moved into these lands during the reign of King Edward I of England, from Burneshead, Cumberland, sometime around 1296.

Little is known about their previous history, but it is thought that they derived from a race called the Boernicians, a race of early Scots that ruled the north East coast of England as far north as Edinburgh. By 1375, the Clan had extended its territories to include Burnhouse of Kair, Burnside of Monboddo, Bralinmuir and Bon Jordan in Inchbreck, and Bernys in the barony of Renfrew.

"But for the name of the Scottish poet, genealogists north of the Tweed have a different origin - His forefathers are said to have come from Taynuilt or Burnhouse there, and emigrated to Forfarshire, where they - of course they were Campbells - were designated by the name Campbells of Burnhouse, and latterly Burness or simply Burns." [1]

Further to the south in England, there is another possible origin of the name: "this surname is derived from a geographical locality. 'at the burn,' i.e. stream; Middle English burne or bourne. More especially parishes in Cambridgeshire, Lincolnshire, and Hampshire." [2]

Early Origins of the MacConbornay family

The surname MacConbornay was first found in Cumberland, where the original name was Burness. Even Robert Burns and his brother both agreed to shorten their name to Burns due to the difficulty in pronunciation by the Gaelic tongue. Later, the name was also spelled Bourne, Burn and even Bernes.

The famed Robert "Rabbie" Burns (1759-1796), Scottish poet and lyricist is best known as the national poet of Scotland, and author of "Auld Lang Syne." He was born in Alloway, Ayrshire, Scotland and was eldest of the seven children of William Burnes (1721-1784), a self-educated tenant farmer.

Early History of the MacConbornay family

This web page shows only a small excerpt of our MacConbornay research. Another 172 words (12 lines of text) covering the years 1200, 1603, 1851, 1877, 1759, 1796, 1741 and are included under the topic Early MacConbornay History in all our PDF Extended History products and printed products wherever possible.

Spelling and translation were hardly exact sciences in Medieval Scotland. Sound, rather than any set of rules, was the basis for spellings, so one name was often spelled different ways even within a single document. Spelling variations are thus an extremely common occurrence in Medieval Scottish names. MacConbornay has been spelled Burns, Burnes, Burness and others.

Another 49 words (4 lines of text) are included under the topic Early MacConbornay Notables in all our PDF Extended History products and printed products wherever possible.

Migration of the MacConbornay family to Ireland

Some of the MacConbornay family moved to Ireland, but this topic is not covered in this excerpt.
Another 85 words (6 lines of text) about their life in Ireland is included in all our PDF Extended History products and printed products wherever possible.

Migration of the MacConbornay family

Such hard times forced many to leave their homeland in search of opportunity across the Atlantic. Many of these families settled along the east coast of North America in communities that would become the backbones of the young nations of the United States and Canada. The ancestors of many of these families have rediscovered their roots in the 20th century through the establishment of Clan societies and other patriotic Scottish organizations. Among them: Archibald Burns who settled in Philadelphia, Pennsylvania in 1850; Bernard, Catherine, Charles, Daniel, Edward, George, Henry, James, John, Joseph, all arrived in Philadelphia between 1840 and 1860.