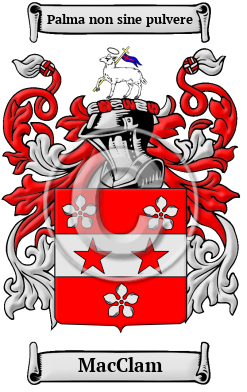 Early Origins of the MacClam family

The surname MacClam was first found in Northumberland, where they were Lords of the manor of West Denton. The earliest record of this name in Scotland appears to be of Adam Lamb of Sympering, who witnessed a charter of lands in Grayden in c. 1288. Adam Lamb and Lambe fiz Austyn de Nibreim (Austin Lamb) both rendered homage in 1296 to King Edward I of England on his brief conquest of Scotland. Thomas Lambe was a tenant in Dumfriesshire in 1376. John Lambe of Scotland received twenty pounds from Richard II of England for killing Oweyn of Wales, "the King's enemy in France." Duncan Lam held a tenement in Edinburgh in 1392. A master Archibald Lame taught young monks at the Abbey of Arbroath in 1486. [1]

Early History of the MacClam family

Spelling variations of this family name include: Lamb, Lambe, Lam, Mclamb and others.

More information is included under the topic Early MacClam Notables in all our PDF Extended History products and printed products wherever possible.

Migration of the MacClam family to Ireland

Some of the MacClam family moved to Ireland, but this topic is not covered in this excerpt.
Another 50 words (4 lines of text) about their life in Ireland is included in all our PDF Extended History products and printed products wherever possible.

Migration of the MacClam family